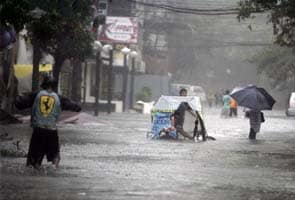 Most deaths occurred in metropolitan Manila, which already was soaked by heavy monsoon rains ahead of Typhoon Nesat's arrival with more downpours and wind gusts of up to 93 mph (150 kph). Downtown areas along Manila Bay suffered their worst flooding in decades.

Pounding rains obscured the view of anyone on the streets as soldiers and police scrambled to safely evacuate thousands of people in low-lying areas, where rivers and the sea spilled into shanties, hospitals, swanky hotels and even the seaside U.S. Embassy compound.

"It's flooded everywhere. We don't have a place to go for shelter. Even my motorcycle got filled with water," said motorist Ray Gonzales, one of thousands stranded by fast-rising floodwaters.

The massive flooding came exactly a day after this sprawling, coastal city of 12 million held two-year commemorations for the nearly 500 people killed during a 2009 cyclone, which dumped a month's rainfall in just 12 hours. The geography of the archipelago makes it a welcome mat for about 20 storms and typhoons from the Pacific each year.

Some residents acted more quickly this time to evacuate homes as waters rose, including in the Manila suburb of Marikina where 2,000 people escaped the swelling river by flocking to an elementary school, carrying pets, TV sets, bags of clothes and bottled water.

"We can replace things, but not people's lives," said janitor Banny Domanais, arriving at the school with his wife and three young daughters.

Typhoon Nesat hit ashore before dawn Tuesday in eastern provinces and headed inland just north of Manila with up to an inch of rain per hour, half that of the storm two years ago, said government forecaster Samuel Duran.

Emergency workers evacuated river areas in Manila that are notorious for flooding. In all, authorities ordered more than 100,000 people across the country to shelter from the storm's sustained winds of up to 75 mph (120 kph) and its rains - dropping from an immense 400-mile (650-kilometre) cloud band.

Along downtown Manila's historic baywalk, cars and buses were stuck and residents struggled through floodwaters as waves washed over the seawall, turning a six-lane highway into a huge brown river. Sidewalks and buildings entrances were swamped.

In the financial district of Makati, a billboard fell on two cars and a bus, causing injuries.

Neck-deep waters on the ground floor of the Manila Hospital forced staff to move patients to higher floors and flooded generators left the facility without power, spokeswoman Evangeline Morales said.

Soldiers and police in trucks moved thousands of residents, mostly women and children, from the Baseco shanty facing Manila port after many houses were washed away. Male family members were reluctant to leave, saying they wanted to guard their property.

The Philippine Stock Exchange and U.S. Embassy were closed.

Waters at the gates of the embassy compound reached chest-deep, and staff were told to stay home, spokeswoman Tina Malone said.

"There was some flooding in the embassy. I don't know the extent. I'm not there right now," Malone said.

The Sofitel Philippine Plaza relocated its guests after flooding damaged areas of the high-end hotel on the shores of Manila Bay. Sirinate Meenakul, the hotel's regional communications director, said no guests or staff were injured. She did not say how many guests were there.

Benito Ramos, a retired army general who heads the Office of Civil Defence, said authorities were still assessing the damage as the typhoon continued to pummel some areas of the country. He said it was heart-warming to see Filipinos remaining calm amid the unfolding crisis.

"We see people on the roofs of their houses drinking gin and smiling and waving," Ramos said. "Such resiliency helps them get by in stressful times."

Seasonal monsoon rains ahead of the typhoon plus winds pushing seawater inland had worsened the situation, forecaster Duran told the AP. "Land is saturated with rain so the next rain became run-off and was already floodwater," he said.

The wind sent storm surges over an embankment that then trapped water on the city side so that it "couldn't flow back to the bay," said Francis Tolentino, chairman of Metro Manila Development Authority.

President Benigno Aquino III, on a state visit to Japan, told Associated Press Television News he was confident that authorities were adequately responding to flooding. He said he believed power would be restored to most of the Philippine capital by Tuesday afternoon.

However, most of downtown was in darkness as night fell and cell phone coverage was interrupted.

He said in an earlier statement that the government had carried out preventive evacuations, and that nearly half of the Luzon areas served by the main power distributor were without electricity due to short circuits caused by high winds.

The first reported death was a 1-year-old boy who drowned in the central island province of Catanduanes after falling into a creek, the government disaster agency reported. As the typhoon's winds lashed metropolitan Manila, a mother and child were killed when their house was hit by a falling tree, and four were reported killed by a collapsing wall.

Two others drowned, while a man was buried in a landslide in Olongapo west of Manila and another died in traffic collision. Four girls and a baby were pinned to death by falling trees north of Manila, and three more children were missing.

Promoted
Listen to the latest songs, only on JioSaavn.com
Four people were unaccounted for in a landslide in mountainous Ifugao province, as were four fishermen while more than 50 others were rescued along eastern shores after their boats overturned in choppy seas. Forecasters warned of 12-foot-high (4-metre-high) waves.

The storm was expected to leave the Philippines late Tuesday and head into the South China Sea toward southern China.