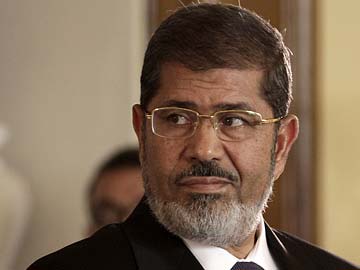 ALEXANDRIA, Egypt: An Egyptian court on Saturday sentenced two supporters of former President Mohamed Morsi to death for committing murder during violence that broke out in Alexandria last year after the army deposed the Islamist head of state.

The two men - Mahmoud Ramadan and Abdullah el-Ahmedi - were standing trial on charges that included throwing youths from the roof of a building in the Mediterranean city.

The judge ruled that their files be referred to the mufti, the country's highest religious authority to whom death sentences are always sent for review.

In a separate case on Monday, an Egyptian court in the southern province of Minya sentenced 529 supporters of Morsi's Muslim Brotherhood to death, drawing strong criticism from Western governments and human rights groups.

The judge in Alexandria postponed the trial until May 19, pending the mufti's review of the sentences, state news agency MENA reported. Sixty other people are standing trial in the same case and their verdicts are also expected on May 19.

The violence in Alexandria's Sidi Gaber district broke out in the days after the army deposed Morsi on July 3 following mass protests against his rule. A total of 18 people were killed in clashes in the area, MENA said.

Footage of at least two youths being thrown from a roof was widely broadcast in Egypt at the time.

"This ruling is justice from God," Badr Hassouna, father of Mohamed Badr who died after being thrown from the roof, said in the courtroom.

The ruling triggered chants for and against Abdel Fattah al-Sisi, the general who deposed Morsi and who is expected to become the next president after announcing his intention to run in a forthcoming election.

The date is expected to be announced on Sunday.

The sentences drew a defiant response from the defendants.

Promoted
Listen to the latest songs, only on JioSaavn.com
"Life is not important. Nothing is important, but our Islam is important," they chanted, some of them holding aloft the Koran.