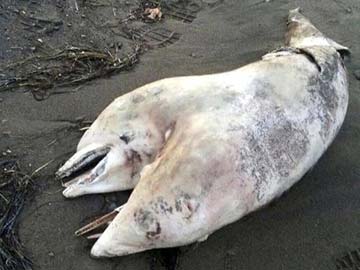 In this photo of con-joined dolphin taken by gym teacher Tugrul Metin, while he was vacationing during the first few days of August 2014, in the Aegean Sea coastal town of Dikili, Izmir province of Turkey.

Ankara: A marine biologist says that his university does not know the whereabouts of a dead two-headed dolphin photographed on a beach in western Turkey.

Mehmet Gokoglu said on Tuesday that, based on photos, the mammal appears to be conjoined dolphins.

Promoted
Listen to the latest songs, only on JioSaavn.com
He denied media reports that his university in Antalya, southern Turkey, is studying the remains, but added that the university would like to display them if it can locate them.

The dolphin calf was discovered on a beach in Dikili, near the Aegean city of Izmir, last week by a vacationing gym teacher.