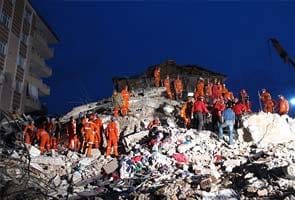 Ercis, Turkey: Rain and snow on Thursday compounded difficulties for thousands rendered homeless in the powerful earthquake that hit eastern Turkey, and the government said the death toll has gone up to 523.

The prime minister's center for crisis and emergency management said 1,650 people were injured and 185 were rescued from the rubble.

Meanwhile, a moderate earthquake, measuring 5.4 according to Turkey's Kandilli seismology center, hit the neighboring province of Hakkari, sending people rushing out of buildings in fear and panic. No injuries were immediately reported in that temblor, which was centered some 90 miles (150 kilometers) south of the epicenter of Sunday's devastating quake.

Turkish authorities delivered more tents after acknowledging initial problems in the distribution of aid for survivors of the 7.2-magnitude quake that shattered at least 2,200 buildings on Sunday.

Some media reports had said rescuers pulled out a 19-year-old alive from the rubble on Thursday, but Mustafa Ozden, the head of the team that brought out the young man, told The Associated Press that he was rescued on Tuesday, not Thursday.

Rain gave way to intermittent snow, deepening the hardship of thousands of people either rendered homeless in the powerful earthquake or too afraid to return indoors amid aftershocks that continued to rattle the area.

In the worst-hit city of Ercis, families who managed to obtain tents shared them with others. Some people spent a fourth night outdoors huddled under blankets in front of campfires, either waiting for news of the missing or keeping watch over damaged homes.

Sermin Yildirim, who was eight months pregnant, was with her twins and husband. They shared a tent with a family of four who were distant relatives. Her apartment in a three-story building was not damaged but the family was reluctant to return.

"It's getting colder, my kids are coughing. I don't know how long we will have to stay here," Yildirim said. "We were not able to get a tent. We are waiting to get our own."

More than a dozen television stations organised a joint aid telethon, amassing just under 62 million Turkish Lira ($37 million) in aid for the region.

Promoted
Listen to the latest songs, only on JioSaavn.com
Searchers sifting through piles of debris recovered more bodies. They included two dead teenage sisters and their parents who were holding hands, and a mother clutching her baby boy, according to media reports.

Two teachers and a university student were rescued from ruined buildings on Wednesday, but there were no signs of survivors elsewhere and excavators were clearing debris from some collapsed buildings.