Trump had been assailed from across the political spectrum for failing to respond more forcefully to Saturday's violence in Charlottesville. 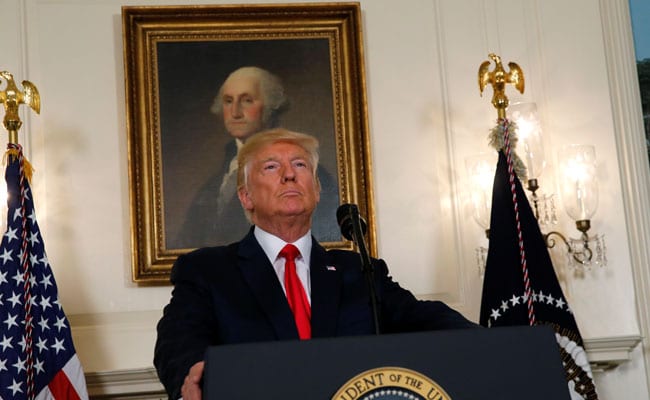 Trump said anyone who engaged in criminal behaviour at the rally would face justice.

CHARLOTTESVILLE: U.S. President Donald Trump denounced neo-Nazis and the Ku Klux Klan as criminals and thugs on Monday, bowing to mounting political pressure to condemn such groups explicitly after a white-nationalist rally turned deadly in Virginia.

Trump had been assailed from across the political spectrum for failing to respond more forcefully to Saturday's violence in Charlottesville. The head of one of the world's biggest drug companies quit a presidential business panel as a result, saying he was taking a stand against intolerance and extremism.

Critics slammed Trump for waiting too long to address the bloodshed, as well as for initially saying that "many sides" were involved, instead of singling out the white supremacists widely seen as sparking the melee. Several senators from his own Republican party had harsh words for him.

Some 48 hours into the biggest domestic challenge of his young presidency, Trump tried to correct course.

"Racism is evil and those who cause violence in its name are criminals and thugs, including the KKK, neo-Nazis, white supremacists and other hate groups that are repugnant to everything we hold dear as Americans," the president said in a statement to reporters at the White House on Monday.

"We condemn in the strongest possible terms this egregious display of hatred, bigotry and violence," he said.

A 20-year-old man said to have harboured Nazi sympathies was facing charges he plowed his car into protesters opposing the white nationalists, killing 32-year-old Heather Heyer and injuring 19 people. The accused, James Fields, was denied bail at a court hearing on Monday.

Trump said anyone who engaged in criminal behaviour at the rally would face justice, the Republican president said.

"I wish that he would have said those same words on Saturday," responded Democratic Senator Mark Warner of Virginia on MSNBC. "I'm disappointed it took him a couple of days."

As the chorus of outrage over Virginia grew louder on Sunday, Trump stayed silent on the matter while at his golf course in Bedminster, New Jersey.

Early Monday, he took to Twitter - his preferred method of communication - to attack Democrats over trade deals and to endorse a political candidate in Alabama, but said nothing about white supremacists.

In a strong rebuke to Trump early on Monday, the black chief executive of Merck & Co Inc <MRK.N>, Kenneth Frazier, resigned from a business panel led by the president, saying expressions of hatred and bigotry must be rejected.

Trump quickly hit back on Twitter, but made no reference to Frazier's reasons for quitting the panel, instead revisiting a longstanding gripe about expensive medicines. Frazier would now have more time to focus on lowering "ripoff" drug prices, Trump tweeted.

The jarring images of violence from Charlottesville and the heated public debate over racism resonated around the world, particularly in Europe where leaders are contending with a wave of xenophobia.

German Chancellor told local broadcaster Phoenix on Monday that clear and forceful action must be taken to counter right-wing extremism, and that "we have quite a lot to do at home ourselves."

About 130 people demonstrated outside the U.S. Embassy in London, some with placards reading "Facsism is not to be debated, it is to be smashed," and "I am an ashamed American."

The United Nations said there must be no place in today's societies for the violent racism, anti-Semitism, xenophobia and discrimination on display in Charlottesville.

Protests were planned for Monday evening outside the White House and Trump Tower in New York, where Trump is expected to travel later on Monday.

Saturday's disturbances broke out after white nationalists converged to protest at plans to remove a statue of Confederate General Robert E. Lee. Such monuments are viewed today by many Americans as symbols of racism, because of the Confederate defence of slavery during the Civil War.

Asked on Monday whether one side was more responsible for the violence than another, Charlottesville police chief Al Thomas said: "This was an alt-right rally," - using the term to describe a loose grouping that rejects mainstream politics and includes neo-Nazis, white supremacists and anti-Semites.

In assailing Trump for his earlier comments on the violence, critics noted that right-wing extremists have been a loyal segment of his political base. The anger over his initial response added to a litany of problems for the president.

Opponents have attacked his inflammatory rhetoric towards North Korea and he is fuming with fellow Republicans in Congress over their failure to notch up any major legislative wins during his first six months in office.

The mother of the woman killed on Saturday welcomed Trump's latest comments. In a statement cited by NBC News, Susan Bro thanked him for what she called "those words of comfort and for denouncing those who promote violence and hatred."

Fields appeared in a Charlottesville court on Monday by video link from the jail where he is being held on a second-degree murder charge, three counts of malicious wounding and a single count of leaving the scene of a fatal accident. His next court date was set for Aug. 25.

Several students who attended high school with Fields in Kentucky described him as an angry young man who passionately espoused white supremacist ideology.

The U.S. Justice Department was pressing its own federal investigation of the incident as a hate crime.

Also on Monday, in what critics decried as an official endorsement of racism, Trump told Fox News he is considering pardoning Joe Arpaio, the former Arizona sheriff found guilty last month of criminal contempt for violating the terms of a 2011 court order in a racial profiling case.

Promoted
Listen to the latest songs, only on JioSaavn.com
Arpaio styled himself "America's toughest sheriff" for his tough treatment of inmates and crackdown on illegal immigrants.
© Thomson Reuters 2017