A video shot in his hotel room shortly after the rally shows Cantwell learning there is a warrant out for his arrest. He appears to be on the verge of tears. 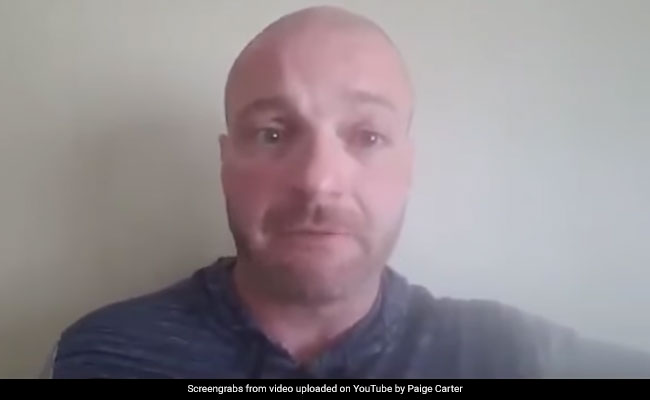 Chris Cantwell earned the nickname for his reaction to news of a warrant for his arrest.

When Chris Cantwell learned that fellow neo-Nazi James Fields Jr. had been convicted of murder, he promised violent retribution - "complete and total destruction" by "an army of fanatics" ready to die for their cause.

But, as with everything Cantwell has done since August 2017, his vow was at least somewhat blunted by his dramatic fall and humiliating nickname: the "Crying Nazi."

Cantwell, who earned the nickname for his reaction to news of a warrant for his arrest, made the threats on Friday, the same day Fields was found guilty of murder for ramming his car through a street crowded with counterprotesters at a rally in Charlottesville, Virginia, last year. Thirty-five people were injured and one killed, Heather Heyer.

As The Washington Post's Joe Heim and Kristine Phillips reported, the killing "culminated a dark 24 hours in this quiet college town." And Cantwell was mostly in the middle of it. A photographer for The Washington Post captured him sitting on a curb, being tended to by police after being hit in the eyes with tear gas.

A year later, with Fields' trial done, Cantwell went on the alt-right social media platform Gab and aimed his words at "Charlottesville and the broad Left." He said Fields' conviction "will drive us toward your complete and total destruction." He claimed that there are more than enough people "to put in the massive amounts of unpleasant work."

The next "Dylann Roof, the next Robert Bowers, he's not going to go out blasting and be out of the fight," Cantwell wrote.

Cantwell has made similarly ominous threats before. As The Washington Post's Avi Selk wrote in August 2017, "Cantwell was the thick-armed embodiment of white nationalism to tens of millions of people - the star of VICE News and HBO's documentary about [the] rallies, which has been seen more than 30 million times."

He even weighed in on the violence that came to epitomize the rally, saying the fatal car strike was justified because the protesters had been "stupid animals."

But then came Cantwell's fall.

A video shot in his hotel room shortly after the rally shows Cantwell learning there is a warrant out for his arrest over the use of illegal gas and injury by caustic agent or explosive. He appears to be on the verge of tears.

"I've been told there's a warrant out for my arrest," Cantwell pleads to the camera, through sniffles and in a trembling voice. "I don't know what to do!"

The dismantling of his persona wasn't over.

A short time later his OkCupid profile was leaked online, describing him as single, 6-feet-tall and interested in marriage and children.

"Ideally I'd like to talk on here briefly, move quickly to the phone, and then we can go out on a date and see what happens," wrote the user "ItsChris603," beneath what appears to be a gym-mirror selfie of Cantwell.

If that happens, it will be without the help of OkCupid. Ten minutes after the company learned Cantwell was on its site, it banned him "for life."

"There is no room for hate in a place where you're looking for love," the company said at the time.

Cantwell ultimately entered a plea deal on the charges this summer, according to Charlottesville NBC affiliate WVIR. He was given credit for 107 days he spent in jail, and ordered not return to Virginia for five years.