Describing the situation at the border as a "growing humanitarian and security crisis," Trump urged Congress to give him the $5.7 billion he has repeatedly demanded for the wall. 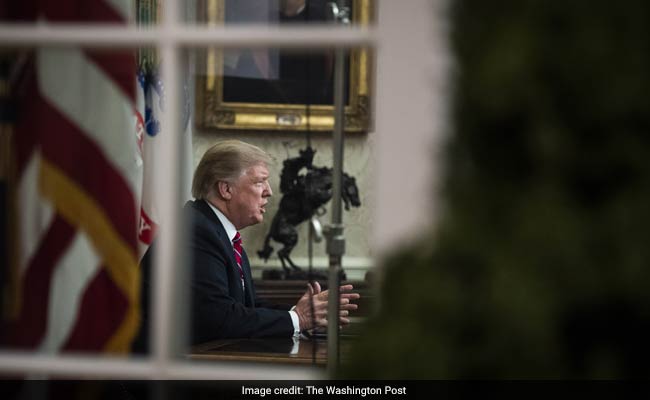 Trump escalated the battle over his long-promised border wall in a nationally televised address.

President Donald Trump escalated the battle over his long-promised border wall Tuesday night, using a nationally televised Oval Office address to rally public support and blame Democrats for a partial government shutdown that is now in its third week.

Describing the situation at the border as a "growing humanitarian and security crisis," Trump urged Congress to give him the $5.7 billion he has repeatedly demanded for the wall.

"This is a humanitarian crisis - a crisis of the heart and a crisis of the soul," Trump said. He added that the federal government "remains shut down for one reason and one reason only: because Democrats will not fund border security."

Democrats have steadfastly resisted Trump's demand for wall funding, an impasse that has resulted in the shuttering of agencies that account for about a quarter of the federal workforce.

Trump and Vice President Mike Pence will attend Senate Republicans' weekly policy luncheon on Capitol Hill on Wednesday, the White House announced. The eight congressional leaders, meanwhile, are expected to head back to the White House later in the afternoon to meet with Trump and resume talks on ending the shutdown, according to several people familiar with the invitation.

Pelosi said Tuesday that she was not aware of the White House's invitation, but "whenever there is a meeting, I'll go."

"We have a pretty good idea of what our options are. But let's hope we can come together, get this done and open up government. That's our goal," she said.

In a round of television interviews earlier Tuesday, Pence did not rule out the possibility that Trump at some point would declare a national emergency but said repeatedly that the administration is seeking a negotiated solution with Congress.

"You know that we could resolve this in a matter of hours if the Democrats would come to the table and start negotiating in good faith," Pence said on CBS' "This Morning."

Negotiations with congressional staff over the weekend, led by Pence, resulted in little progress, according to Democrats and Republicans alike.

Federal agencies continue to grapple with the effects of the shutdown. On Tuesday, the Environmental Protection Agency notified employees that they will receive half their normal salaries on this week's payday. The agency had remained open during the first week of the shutdown.

"I want to make sure you all know that we sincerely miss our furloughed colleagues and the talent and expertise that each of you bring to the Agency," acting EPA administrator Andrew Wheeler wrote in an email to employees, adding that "understandably, many staff were concerned about the complete lack of another paycheck."

Democrats had asked networks for rebuttal time Tuesday night, expressing concerns that the president will try to make a case based on falsehoods. In a joint statement Monday night, Pelosi and Schumer said Trump's address would probably be "full of malice and misinformation" and "Democrats must immediately be given equal airtime."

Others were planning appearances Tuesday night as well. Sen. Bernie Sanders, I-Vt., a potential 2020 White House candidate, was set to deliver a response to Trump's speech that would be streamed online.

As Trump prepared to make a public appeal, top White House officials, including senior adviser and Trump son-in-law Jared Kushner, were working the phones to gain leverage with Congress. But Democrats maintained that no progress had been made.

"We are in the same place we were last Friday," a senior Democratic aide said.

Trump also met with surrogates on Monday to urge them to keep up their TV appearances arguing for the wall, according to a person familiar with the meeting.

Trump is considering invoking the National Emergencies Act of 1976 to declare an emergency, activating executive authorities including the reprogramming of some Defense Department funds.

One possibility under consideration is to negotiate with Democrats for the next few days, then declare a national emergency to end the shutdown, according to a person with direct knowledge of the president's thinking.

Ahead of Trump's speech, pressure to end the shutdown continued to mount. The U.S. Chamber of Commerce sent a letter to lawmakers Tuesday urging Congress and the Trump administration to reopen the government, throwing its support behind a deal that would combine border security measures with protections for "dreamers" brought here illegally as children and those in the temporary protected status program.

"The shutdown is harming the American people, the business community, and the economy," Neil Bradley, the group's executive vice president and chief policy officer, said in the letter.

The bipartisan group that represents the nation's governors also penned a letter to Trump and congressional leaders. The letter from the National Governors Association, dated Monday, cited negative effects on federal workers and state economies and decried the use of a government shutdown to gain leverage in unresolved policy disagreements.

"It is imperative that you reopen the government now and, then, reach across the aisle to find a solution that will end the current impasse," said the letter, signed by the National Governors Association chair and vice chair, Govs. Steve Bullock, D-Mont., and Larry Hogan, R-Md., on behalf of the group, which represents the 55 governors of U.S. states and territories.

Richard Trumka, president of the AFL-CIO, which represents most of the 800,000 affected federal workers as well as thousands of furloughed contractors, said Tuesday that his members want the shutdown to end but do not want to see Democrats yield to Trump's demands on the wall.

"They want the government opened, and they want to get back to work, but they think that the president is responsible because he backed out of a deal that was there that everybody had agreed to, and it didn't have to happen," Trumka said in an interview.

Pelosi has planned a new series of votes on a piecemeal reopening of the government, beginning with the Treasury Department and the Internal Revenue Service. This week's votes will put Republicans in a particularly difficult position because they will spotlight the issue of whether millions of Americans will have trouble receiving tax refund checks.

"There is an opportunity for every American to see who wants government open, and our responsibility is not to do what the president of the United States tells us to do," House Majority Leader Steny Hoyer, D-Md., told reporters Tuesday. "Our responsibility is to do what we think is in the best interest of the American people and the effective and efficient operations of their government."

Hoyer also said that he does not believe Trump has the authority to direct the military to construct a border wall without congressional consent, even with an emergency declaration, and could wind up abusing his powers.

"There is no crisis," Hoyer added. "There is no invasion. There is no clear and present danger." He left open the possibility that congressional Democrats could sue Trump in a bid to block construction.

The idea of using the military to build the wall has not been universally embraced by Republicans.

He added that he thinks border security is "very important." But "it is not a responsibility of the Department of Defense."

One Democrat being lobbied by Kushner - Sen. Joe Manchin III (West Virginia) - said he would not oppose a declaration of a national emergency by Trump if that means the president would allow the shuttered parts of federal government to reopen.

During Tuesday's television interviews, Pence was pressed about false or questionable claims Trump has made in advocating for a wall, including that former presidents told him they wanted to build one and that former president Barack Obama has a 10-foot wall around his house in Washington.

All four living ex-presidents have denied making such a comment, and there is no 10-foot wall around Obama's house.

Experts have also said Trump and other administration officials have significantly overstated the security threat posed by terrorists attempting to cross the southern border.