Kristian Saucier, 31, of Vermont, is the second person to be pardoned in the Trump administration; last year, the president controversially pardoned former Arizona sheriff Joe Arpaio 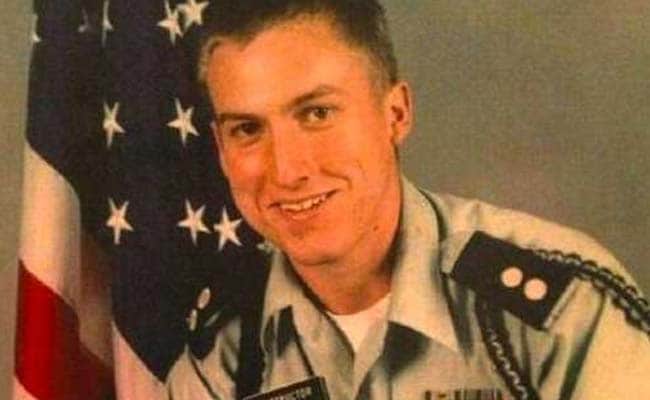 President Donald Trump on Friday pardoned a former Navy sailor whose conviction for unauthorized retention of national defense information became a rallying cry for conservatives who felt it showed Hillary Clinton was treated too leniently in the FBI's investigation of how she handled classified material.

Kristian Saucier, 31, of Vermont, is the second person to be pardoned in the Trump administration; last year, the president controversially pardoned former Arizona sheriff Joe Arpaio, who was convicted of criminal contempt of court for ignoring a judge's order to stop detaining people because he merely suspected them of being undocumented immigrants.

Kathleen Saucier, Saucier's mother, said in an interview Friday that she and other supporters had waged an aggressive public campaign for the pardon, and she thought that effort - coupled with a more sympathetic new administration - helped her son.

"I had to sit on the floor because I was crying so hard," she said. "I'm just so grateful. I'm so grateful."

Saucier, who now works as a garbage collector, pleaded guilty in May 2016 to one count of unauthorized possession and retention of national defense information, admitting he took photos of classified spaces on the USS Alexandria submarine, where he served as a machinist's mate.

In announcing his plea, the Justice Department said Saucier, who had a secret clearance, "knew that the photos depicted classified material and that he was not authorized to take them."

The photos were taken in 2009, although they were not found until 2012. It was by chance the images were discovered at all. Saucier left his phone behind at a garbage dump in Hampton, Connecticut, where a supervisor powered on the device, saw the submarine photos and showed them to a friend who had retired from the Navy, according to a 2015 report in Navy Times.

Saucier told federal agents who confronted him in 2012 that the phone belonged to him, but he denied taking the photos, according to the original criminal complaint. The FBI accused him later of destroying evidence, saying he returned home from an interview with agents, smashed his computer and camera, then drove across the state and flung the fragments in the woods behind his grandfather's house.

Saucier was sentenced in August 2016 to a year in prison, and his case soon attracted the attention of Trump, who compared it with the investigation into Clinton's use of a private email server while she was secretary of state. The FBI ultimately recommended no charges for Clinton or her aides in that case, even though they found classified material had traversed her private server.

"He wanted to take a couple of pictures," Trump said of Saucier. "They put him in jail for a year."

Federal law enforcement officials have contended that Saucier, unlike Clinton, knew he was not supposed to take the photos and did so anyway, and that he destroyed material to impede the investigation.

"I think the new administration took a look at it through different glasses," she said.

A Justice Department spokesperson declined to comment on its involvement, if any, in the process.

Earlier this year, Trump referenced Saucier's case in a tweet about Clinton and top aide Huma Abedin. And earlier this month, Saucier himself appeared on "Fox & Friends," one of the president's favorite TV shows, to press his case.

Promoted
Listen to the latest songs, only on JioSaavn.com
"Obviously, there's two different sets of laws in this country, for the political elite and for, you know, those lower-level, individuals, Americans, like myself," he said, adding, "I think my case draws a very clear example of that."