Trump Organization To Sell His Washington Hotel For $375 Million: Report

The Miami-based investment fund has struck a separate agreement with Hilton Worldwide Holdings to rebrand the Trump International Hotel as a Waldorf Astoria, according to the Wall Street Journal. 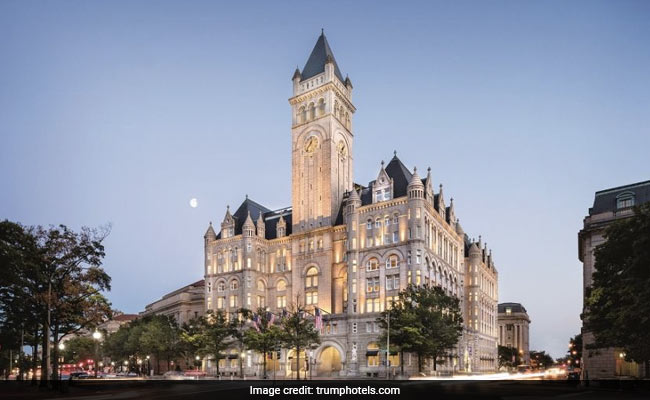 The Trump Organization invested some $200 million in the renovation of the building.

The Trump Organization has reached a deal to sell its Washington hotel lease for $375 million to CGI Merchant Group, which plans to remove ex-president Donald Trump's name from the luxury property's facade, US media reported Sunday.

The Miami-based investment fund has struck a separate agreement with Hilton Worldwide Holdings to rebrand the Trump International Hotel as a Waldorf Astoria, according to the Wall Street Journal.

Contacted by AFP, CGI declined to comment. The Trump Organization and Hilton group also did not immediately return requests.

The historic building just a short walk from the White House and down Pennsylvania Avenue from the US Capitol is not owned by the Trump Organization.

Once the capital city's main post office, the structure is owned by the US government which in 2013 leased it to Trump's real estate company for 60 years, with an option to extend for another 40 years.

The Trump Organization invested some $200 million in the renovation of the building, which was constructed in the late 19th century and is on the National Register of Historic Places.

According to a report by the House Oversight and Government Reform Committee, the company created to manage the hotel, Trump Old Post Office LLC, incurred more than $71 million in losses between the hotel's opening in 2016 and August 2020. It has never turned a profit.

During Trump's presidency the establishment -- known for its massive atrium and soaring clock tower -- served as a meeting place for Republican officials, donors and lobbyists.

At the time several lawmakers and other figures expressed concern that the 263-room hotel was accommodating foreign dignitaries visiting Washington.

They pointed to a potential conflict of interest for Trump, who was both president of the United States and still a key shareholder in the Trump Organization.

A congressional investigation into the matter is ongoing.