Michael Avenatti, a lawyer for Stormy Daniels, said the threat by Michael Cohen and Donald Trump amounted to bullying of his client. 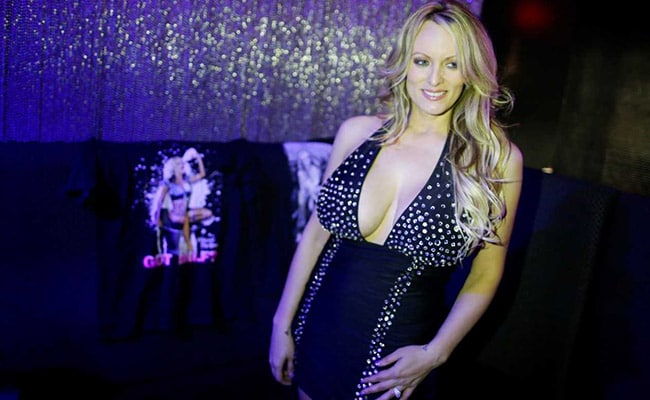 The $130,000 payment to Stormy Daniels has become a matter of interest for government watchdog groups

A lawyer for Cohen's limited liability corporation, Essential Consultants, made the claim in papers filed in federal court Friday.

Cohen also intends to force the dispute with Daniels, who alleges she was secretly paid to keep quiet about her affair with the president, out of the public eye and back into private arbitration, according to the court filing.

In a separate document also filed Friday, a lawyer representing Trump said he agrees with the push to return the proceedings to arbitration, in which all proceedings are confidential.

Michael Avenatti, a lawyer for Daniels, said the threat by Cohen and Trump to pursue millions of dollars in damages, and their efforts to take the matter behind closed doors, amounted to bullying of his client.

"To put it simply - they want to hide the truth from the American people. We will oppose this effort at every turn," Avenatti wrote in an email. "The fact that a sitting president is pursuing over $20 million in bogus 'damages' against a private citizen, who is only trying to tell the public what really happened, is truly remarkable. Likely unprecedented in our history. We are not going away and we will not be intimated by these threats."

Cohen referred all questions to his attorney in the matter, Brent Blakely, who didn't immediately respond to requests for comment. The office of the attorney representing Trump, Charles Harder, said there would be no public statement beyond the material filed in court.

Daniels has said in her own legal filings that she slept with Trump in 2006, and in 2016 - just days before the presidential election - signed an agreement to stay silent about the affair in exchange for a payment of $130,000. The hush agreement required any disputes to be settled confidentially.

The decision to surface the secret deal in public court filings carries financial risks for Daniels. If a judge determines the hush agreement is valid, she faces a penalty of $1 million for each violation of the agremeent's terms.

Cohen and Trump allege that she has already violated the agreement at least 20 times. And she may be poised to violate it again on March 25, when CBS's "60 Minutes" tentatively plans to broadcast an interview with Daniels.

In the court documents filed Friday, lawyers for Cohen and Trump exercised their ability to move the lawsuit from state court to the U.S. District Court for the Central District of California. They say they intend to file a petition with the federal court to force the matter back into private arbitration as quickly as possible.

The $130,000 payment to Daniels has become a matter of keen interest for government watchdog groups. At least two complaints to the Federal Election Commission allege the money was meant to influence the presidential election and therefore amounted to an illegal in-kind contribution to the Trump campaign.

Cohen has acknowledged making the payment to Daniels, but he has never explained what it was for. And he has insisted that he was not reimbursed for the payment by the Trump Organization or the Trump campaign.

Promoted
Listen to the latest songs, only on JioSaavn.com
White House press secretary Sarah Huckabee Sanders has rejected the notion that Trump approved the payment to Daniels.