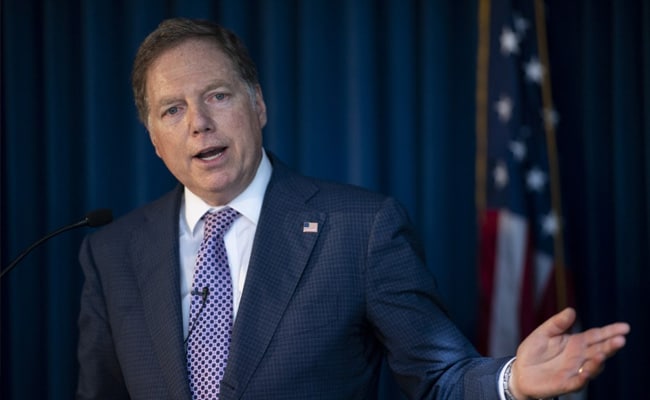 Geoffrey Berman, head of the Southern District of New York attorney's office since 2018, discovered his job was in jeopardy via a press release late Friday from Attorney General Bill Barr saying the prosecutor was stepping down.

Berman responded that he had "no intention" of quitting, and that his office's "investigations will move forward without interruption."

But Barr sent him a letter Saturday saying Trump had agreed to fire the official "as of today."

The fast-intensifying crisis has pitted the government against much of Washington's legal community -- and has apparently set Barr against Trump, who denied any involvement in the case.

In his letter, circulated widely by US media, Barr accused Berman of having "chosen public spectacle over public service" through his defiance.

Berman -- who later confirmed in a statement he would be leaving "immediately" -- finds himself at the center of the latest controversy in what Democrats have characterized as the politicization of the Justice Department under Barr.

But Trump, speaking to reporters ahead of a campaign rally in Tulsa, Oklahoma, denied sacking Berman -- further adding to the confused messaging coming from the administration.

"That's all up to the attorney general... He's working on that, that's his department, not my department," Trump said. "I'm not involved."

Berman, a Republican who held a position in Trump's transition team and was once a law partner of Giuliani, has pursued cases against tycoon sex offender Jeffrey Epstein, who was found dead in his Manhattan jail cell last year.

He has also investigated two associates of Giuliani accused of campaign finance violations and helping dig up dirt on Trump's election challenger Joe Biden as part of the Ukraine scandal over which Trump was impeached.

Two whistleblowers are scheduled to testify Wednesday on "why Barr's attempt to fire Mr Berman is part of a larger, ongoing, and wholly unacceptable pattern of conduct," the statement added.

The Trump administration has in recent months fired or demoted inspectors general for the Pentagon, the intelligence community and the Department of Health and Human Services, as well as a senior health official who questioned Trump's promotion of unproven drug therapies for COVID-19.

Meanwhile Barr has been accused of repeatedly acting as Trump's personal lawyer instead of in the interests of the public following the Justice Department's intervention in several cases involving Trump allies.

More than 1,000 former department officials signed a statement calling for Barr's resignation over his interference to get a lighter sentence for longtime Trump friend Roger Stone.

Since then Barr has been berated for his department's decision to drop the case against Trump's first national security advisor Michael Flynn, who pleaded guilty in 2017 to lying about his Russia contacts to the FBI.

Jonathan Turley, a constitutional law professor at George Washington University, argued however that Barr's move may have had nothing to do with investigations of Trump allies.

"Barr needs to be clear as to why he wanted to remove Berman and, most importantly, to guarantee that the underlying investigations will not be impacted by this change in leadership," Turley told AFP.