Too many cooks for this royal cake 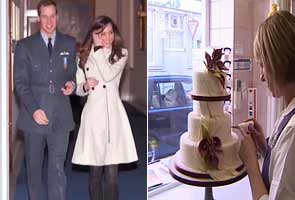 Stockport, United Kingdom: Britain's Prince William and his fiancee Kate Middleton seem set on another break with tradition, this time through their choice of wedding cake.

For almost forty years, Andrew Davidson's bakery, Celebration Cakes has provided the cake for major royal weddings. He's supplied wedding cakes for all four of the Queen's children, including that of William's parents - Charles and Diana in 1981.

But this time the royals have politely declined, in a further sign that William and Kate are determined to do things their way.

It took him and his students six weeks to bake a wedding cake for Charles and Diana, a five-tier structure that towered two meters high.

It was one of 23 wedding cakes accepted by Charles and Diana, in keeping with a tradition that bakers compete for the honour of supplying cakes, free of charge, to royal weddings.

The company had been expecting to send a cake to William and Kate's wedding too, but their application was turned down.

A disappointed Liz Davidson said it appeared Kate was putting her own stamp on wedding preparations rather than rely on Buckingham Palace courtiers.

Promoted
Listen to the latest songs, only on JioSaavn.com
"They're organising the wedding themselves, so they have more involvement with the wedding on this occasion, and perhaps she's choosing her cake maker and her dressmaker herself," she said.

The couple will marry on April 29 at Westminster Abbey in London.