Thousands Protest In Hong Kong Over Jailing Of Democracy Activists

William Cheung, an engineer in his 40s, described the ruling as "the beginning of white terror" in Hong Kong. 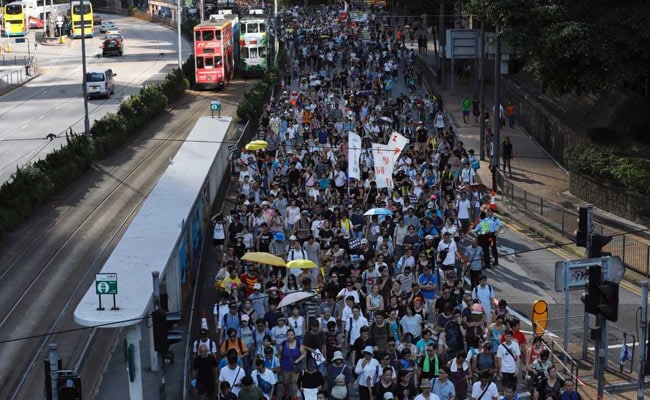 Hong Kong: Thousands of supporters of three jailed young democracy activists took to the streets in Hong Kong on Sunday to protest their sentences.

Joshua Wong, Nathan Law and Alex Chow, leaders of the 2014 Umbrella Movement rallies, were sentenced to six to eight months in jail on Thursday for their role in a protest that sparked the months-long demonstrations calling for democratic reforms.

People took on the summer heat to stream from the district of Wan Chai to the Court of Final appeal in the heart of Hong Kong Island, protesting the jail terms.

They held signs including: "Give back hope to my children" and "One prisoner of conscience is one too many" as they gathered in one of the biggest recent rallies the city has seen.

Hong Kong parade today to support all political prisoners in Hong Kong. I hope everyone pay attention to them. pic.twitter.com/woGz7sxoHJ

William Cheung, an engineer in his 40s, described the ruling as "the beginning of white terror" in Hong Kong.

"These young people are our hope for the future. We shouldn't treat them like this," Jackson Wai, a retired teacher in his 70s, told AFP as he teared up.

Rights groups and activists called the case against the trio "political persecution" and more evidence that an assertive Beijing is tightening its grip on the semi-autonomous city.

The Beijing-backed Hong Kong government brought the case for harsher sentences against the three, saying previous non-custodial terms were too light and did not serve as a deterrent to activists undermining stability.

University student Ann Lee said the government's efforts to overturn the previous sentences were "attempts to intimidate us from taking part in acts of resistance."

Hong Kong enjoys freedoms unseen on the mainland after being handed back to China in 1997 under a "one country, two systems" deal, but there are growing fears Beijing is trampling the agreement.

Wong and former legislator Law, who was disqualified from parliament last month following Beijing intervention, had expressed their intentions to run for office in future elections, but will be prevented from standing for five years because their jail terms exceeded three months.

Wally Yeung, one of the panel of three judges that handed down the jail terms, said in a written judgement there had been an "unhealthy trend" of people in Hong Kong breaking the law for the sake of their ideals and having what he described as "arrogant and self-righteous ideas".

Protesters stayed on until the evening Sunday as campaigners addressed the crowds and messages of solidarity were projected onto the building of the Court of Final Appeal.

Wong, 20, is currently held in a high security prison for young male offenders. Law and Chow are at a maximum security holding centre.
Comments
Hong KongProtests in hong kong