Ukraine military has urged anyone between the age of 18 and 60 to pick up a gun and get ready to fight. 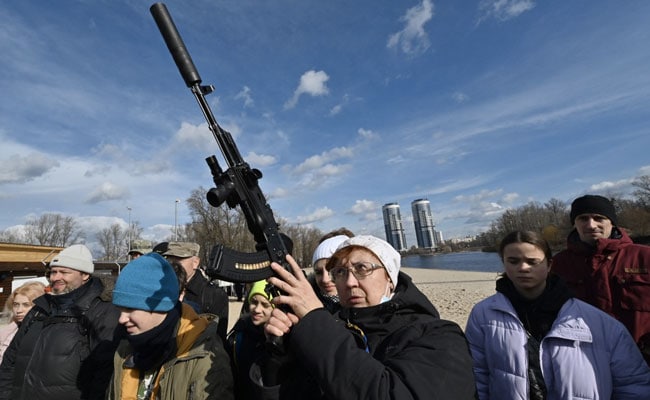 Ukrainian historian Yuriy Korchemniy has never fired an assault rifle in his life.

But he joined scores of others and picked up a Kalashnikov when boxes of them were dumped from trucks and handed out to Ukraine's new volunteer defence units on day two of Russia's invasion.

"They gave out the rifles, loaded them for us and here we are," the 35-year-old said with a slightly sheepish grin.

The Kyiv bridge underpass he was guarding with a handful of other men -- some in their 50s -- leads to Western-backed President Volodymyr Zelensky's administrative complex.

The reverse side of the road runs through a working-class district of Soviet-style tower blocks that witnessed a deadly shootout with a small group of Russian forces only a few hours earlier.

An AFP team saw a middle-aged civilian who was killed in the clash carried away by ambulance workers.

One witness said the civilian was cut down by bullets fired by the Russians from a speeding armoured vehicle.

"I only know how to shoot single rounds, so my plan is to click this here and switch off the automatic mode," he said, cautiously patting the shiny weapon.

A surreal sense of fighting ghosts has descended on this once-bustling city of three million people.

Sirens wail and thudding booms crash across swathes of Kyiv at random hours.

The deserted streets are distinguished by pockets of nervous-looking soldiers and oddly relaxed volunteers shuffling from foot to foot and smoking.

Pedestrians who venture out look almost oblivious to the danger.

Some are glued to their phone screens and one couple was spotted jogging with their puppy.

But the Russians -- their advance toward the city's gates confirmed by the distant blasts and empty bullet casings scattered on intersections -- are nowhere to be seen.

A masked volunteer unit commander who goes by the nom de guerre "Bob" admitted he had no idea where the Russians go after attacking.

"I don't know," the commander said. "I have one man injured. This street was hit with bullets -- and not the ordinary bullets like in my machine gun. We have smaller bullets. The Russians use much bigger bullets."

Ukraine's once-dilapidated armed forces have been beefed up by years of steady Western assistance and an urgent flurry of arms shipments aimed at deterring Putin.

But they remain an over-stretched and out-gunned force.

Government troops had focused for eight years on fighting Russian-backed insurgents on a frozen frontline in the east -- then Putin invaded from three directions at once.

This forced Ukraine to scramble to send reinforcements to the northern frontier by Belarus and the southern one by Kremlin-annexed Crimea.

The military then urged anyone between the age of 18 and 60 to pick up a gun and get ready to fight.

Paragliding instructor Roman Bondertsev said he heeded the call "because it's better than being at home doing nothing. This way I am less afraid".

"And if I get shot, there will be two people ready to come take my weapon and take my place," the 47-year-old said.

The extreme sports coach was better able to contain his anger at the Russian invasion than mechanic Ruslan Bitsman.

"But it's my country -- my country, you understand. You ask what I think about Putin? Only unprintable things."

Yet both men admitted facing difficult odds keeping the Russians from blowing past their positions.

"I only took a weapon in my hands for the first time yesterday. What can you do? We will try our best," Bondertsev said.