This School District's Plan To Stop Shooters: Arming Students With A Bucket Of Rocks

David Helsel's comments come amid public debate about mass shootings after a man killed 17 people at a high school in Parkland, Florida. 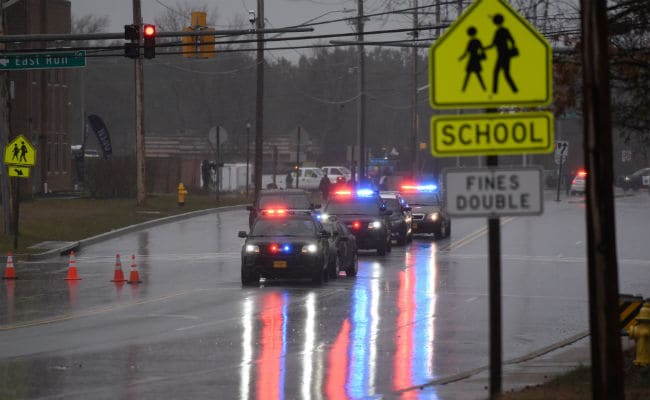 One schools superintendent has a novel way to keep his students safe from school shooters: arming them with rocks.

"Every classroom has been equipped with a five-gallon bucket of river stone," Helsel explained about his Blue Mountain School District in Schuylkill County outside Harrisburg, Pittsburgh, in a video broadcast by ABC affiliate 16 WNEP. "If an armed intruder attempts to gain entrance into any of our classrooms, they will face a classroom full of students armed with rocks, and they will be stoned."

Helsel's comments come amid a new chapter in the public debate about mass shootings after a man killed 17 people at a high school in Parkland, Florida. Despite polls showing that large numbers of Americans support stricter gun-control measures, Congress has thus far not produced any significant legislation, and schools and other officials have looked to other solutions. President Trump floated an NRA-backed idea to arm teachers.

Helsel told local news reporters that students in his district routinely drilled on shooter simulations and were given active shooting training through a program known as ALICE, short for Alert, Lockdown, Inform, Counter, Evacuate.

According to ABC, ALICE protocol involves evacuating students and barricading classroom doors for those who can't safely leave. In at least one school district, in Redmond, Washington, ALICE training also involved guidance for children to distract an intruder.

Helsel described the bucket of rocks, which will be kept in classroom closets, as a "last ditch" option to use as an alternative to students hiding passively under desks.

"At one time, I just had the idea of river stone," Helsel said. "They're the right size for hands, you can throw them very hard, and they will create or cause pain, which can distract."

His schools have been using the idea, called "go buckets," for the last two years, according to BuzzFeed.

Another district had floated the idea of using golf balls, Helsel said, according Fox News but that idea did not seem effective to him.

"Obviously a rock against a gun isn't a fair fight, but it's better than nothing," he said. "I'm not sure why some people feel that it's more appropriate to be a stationary target under a desk in a classroom rather than be empowered to defend yourself and provide a response to deter the entry of an armed intruder into their classroom."

Some students and parents interviewed by the outlet were supportive of the idea.

"At this point, we have to get creative. We have to protect our kids first and foremost," parent Dori Bornstein told 16 WNEP. "Throwing rocks, it's an option."

Susan Spicka, executive director of Education Voters of Pennsylvania, told Buzzfeed that she was at the hearing and a lawmaker responded to Helsel's bucket of rocks plan by saying, "Can I come out and watch?", which elicited laughter.

"School districts in Pennsylvania are so under-funded, then they joke about kids having to defend themselves," she said.

Hundreds of thousands of protesters are expected to converge in Washington on Saturday to call for stricter gun regulations.

"We've been trying to be proactive, just in case," Helsel told ABC. ""We wanted to provide some type of last response to an intruder . . . rather than crawling under a desk and getting shot."

Promoted
Listen to the latest songs, only on JioSaavn.com
Helsel did not immediately return a request for comment.

(This story has not been edited by NDTV staff and is auto-generated from a syndicated feed.)
Comments
US shootingBlue Mountain School District