"Like Rocket Taking Off": $7 Million Paris Fountain With 3 Tonne Crystals

Each fountain is comprised of a four-storey-high, bronze-alloy pole that supports three descending arms made of pieces of Swarovski cut crystal studded with LED lights that sparkle at night. 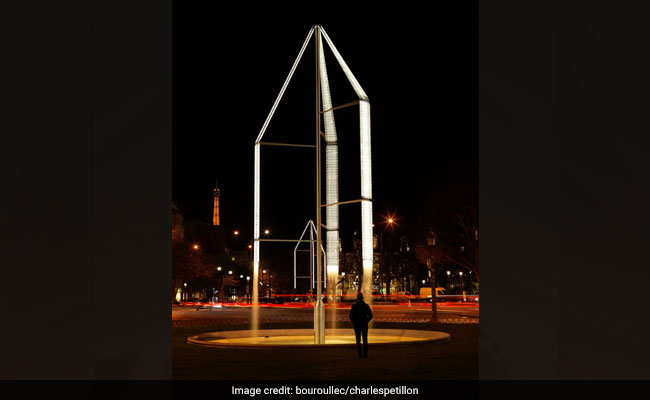 Expensive decorative scaffolding, or a welcome addition to the French capital's most famous avenue? New designer fountains on the Champs-Elysees have reopened a debate in Paris about how to add modern twists to the city's beloved classic architecture.

Located at a roundabout around halfway between Tuileries Garden and the Arc de Triomphe, the fountains were inaugurated by Paris mayor Anne Hidalgo on March 21, and have divided opinion in the City of Light.

"When you're close up, it's original, but when you go down the Champs-Elysees and you look at them all together, you might think that it's a bunch of scaffolding that's been put up and needs to come down at some point," one long-time resident grumbled to AFP as she walked past.

The six shiny fountains, which rotate to mimic the swirling traffic at the busy intersection, resemble oversized pencils jutting into the air.

Each fountain is comprised of a four-storey-high, bronze-alloy pole that supports three descending arms made of pieces of Swarovski cut crystal studded with LED lights that sparkle at night.

Other Parisians are pleased with the result.

"It's better than before," said Ibrahim Ngaiye, a bicycle courier for the food delivery service Glovo, who was waiting for his next order.

"Before, there were just trees, trash cans and smaller fountains. The roundabout's better like this."

The structures, designed by brothers Ronan and Erwan Bouroullec to replace a set of stone fountains that had fallen into disrepair, pack nearly three tonnes of crystal.

The 6.3-million-euro ($7.1 million) project is the first major initiative of the Paris Foundation, which was established in 2015 to raise money for public projects with a "strong emphasis" on contemporary art.

The project was fully funded by private donations and helped along by a significant discount on the crystal.

Introducing modern art to the streets of Paris has often been controversial, and many residents object to what they see as eyesores -- or frivolous projects financed with public money.

At the end of 2017, a public campaign was launched to prevent the installation of a privately funded sculpture of giant tulips by artist Jeff Koons which was "gifted" to the city after the 2015 Paris terror attacks.

Just over a year after its inauguration, many residents of the poverty-wracked Porte de Clignancourt area on the northern edge of the city are still unhappy with a giant red heart installed on a pole that cost 650,000 euros in public money.

And some locals still cringe at the memory of a giant sculpture appearing to show a man having sex with an animal that was destined for the gardens in front of the Louvre, and another that resembled a sex toy erected in the middle of the Place Vendome, opposite the Ritz hotel.

Perhaps the most controversial of all was the publicly financed glass-and-metal pyramid installed in front of the Louvre palace in 1989 in central Paris.

Designed by the Chinese-American architect I. M. Pei, it was denounced by some at the time for ruining the sight of the former royal palace, but has since become a popular attraction in its own right.

Nadia, who runs a newsstand near the new fountains, said she found them particularly attractive after the sun goes down.

"At night, they sparkle," she told AFP. "With the jets of water coming out of the bottom, it looks like a rocket that's taking off."

(Except for the headline, this story has not been edited by NDTV staff and is published from a syndicated feed.)
Comments
ParisChamps-Elysees