NASA released the pictures, captured at the end of 2017 by the Long Range Reconnaissance Imager, on Thursday. 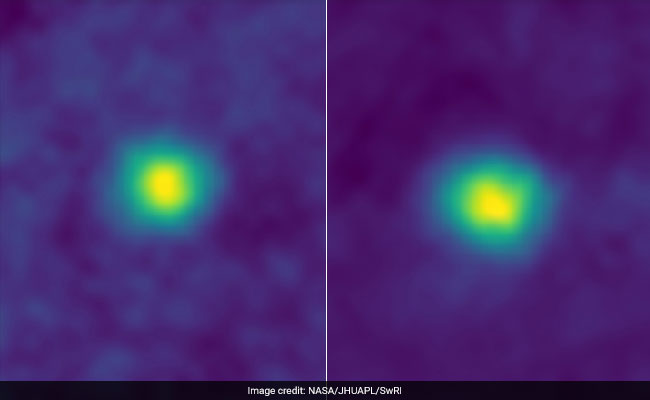 In taking these images, New Horizon broke a record that had stood for nearly 3 decades.

They may not look like much more than blue-green smudges, but the images are record-breakers. The machine that took these photos was farther from Earth than any other functioning camera in existence.

NASA released the pictures, captured at the end of 2017 by the Long Range Reconnaissance Imager, on Thursday. The imager is one of seven instruments aboard the New Horizons spacecraft that reached Pluto in 2015. The camera photographed three subjects in December: a star group nicknamed the Wishing Well, as well as two objects closer to home that are part of the band of rocks, ice clumps and dwarf planets at the edge of our solar system called the Kuiper belt.

"New Horizons is in a very good trajectory to see a lot of these objects close up," said Simon Porter, an astrophysicist at Southwest Research Institute in Colorado and part of the New Horizons mission. Porter calculated when New Horizons could best observe the two Kuiper belt objects and helped schedule the images. (It was a test run, he noted: The image of the object called 2012 HE85, on the right, is a little bit off-center because it wasn't quite where predicted.)

In taking these images, New Horizon broke a record that had stood for nearly three decades. When the probe Voyager 1 was 3.75 billion miles from Earth, on Valentine's Day 1990, it turned its camera toward home and took a photo, called the Pale Blue Dot. Astronomer Carl Sagan, who pitched the photo concept, famously remarked: "Look again at that dot. That's here. That's home. That's us."

The Pale Blue Dot was the final picture beamed back to Earth by Voyager 1, now the most distant thing made by humans and the first craft to cross into interstellar space. Voyager can no longer send back postcards - its camera was shut down. But the spacecraft is not dead yet. NASA turned on Voyager's backup thrusters in 2017 after nearly 40 years of disuse.

New Horizons is not as far from Earth as Voyager 1, but this spacecraft is also on track to leave the solar system. After New Horizons launched in 2006, it flung itself around Jupiter in 2007 to get a boost toward Pluto, where it arrived in summer 2015. There, it changed the way we view the dwarf planet.

New Horizons continues its journey into the cosmos at a rate of about 700,000 miles a day. During its travels, New Horizons alternates between periods of activity and dormancy to conserve fuel.

It was most recently active between September and December 2017. In the first week of December, it passed the Pale Blue Dot's record distance. It imaged the Wishing Well at 3.79 billion miles away, beating the Blue Dot photo shoot by 40 million miles. New Horizons broke its own record in the following days, photographing Kuiper belt objects 2012 HZ84 and 2012 HE85.

With diameters of a hundred kilometers or so, the two Kuiper belt objects are not large enough to classify as dwarf planets. Next to nothing is known about the micro-surfaces of objects like these, Porter said. The images of 2012 HZ84 and 2012 HE85 provide vital context to the understudied bodies at the solar system's bleeding edge.

The Kuiper belt is a vast expanse of rocks, ice clumps, comets and dwarf planets beyond Neptune. (Dwarf planet Pluto is a part of the belt, but it was not recognized as such until the discovery of other Kuiper objects in the early 2000s.) Pluto was estimated in 2015 to be the largest object in the belt, though there are other dwarf planets of note, such as Eris, Haumea and Makemake.

For now, the Hubble telescope, which orbits Earth, can image most Kuiper belt objects in greater detail than New Horizon's eight-inch telescope, Porter said. But that will not be true when New Horizons wakes up in August. The spacecraft's camera will continue to set image records as it flies by a Kuiper belt object called 2014 MU69 in January 2019.

Promoted
Listen to the latest songs, only on JioSaavn.com
The Kuiper belt object flyby is "not nearly as flashy as Pluto," Porter said, but "it's a really unique observation." If a craft were launched today it would take a decade to travel as far as New Horizons has, and there are no immediate plans to follow in its path.