These Dozing 'Dragons' Could Change How We Think About Sleep 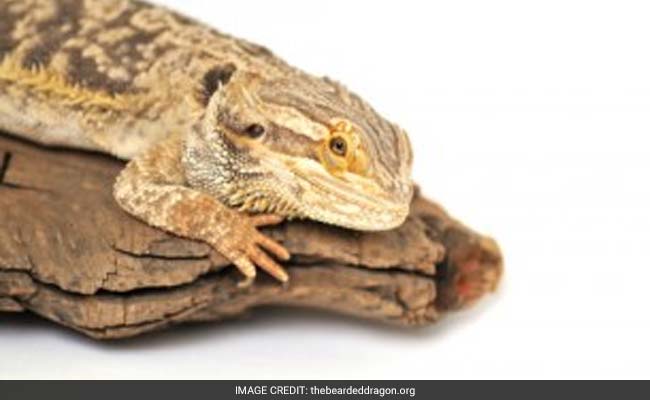 A new study of Australian bearded dragons published on Thursday suggests that sleep may be more ancient and more widespread than we thought.

The dragon's eyes twitch under its lids. An electronic monitor hooked up to its brain shows activity spiking across it. Somewhere inside its reptilian subconscious, a dream may be playing out - of enjoying a satisfying meal or relaxing on a sun-baked stone.

The dragon is sleeping, scientists say. Not just resting, the way fish and wasps and even amoebas do, but really, truly sleeping, the way humans do. It undergoes rapid eye movement, or REM, sleep. Then it cycles through a phase called slow-wave sleep. And it may even have dreams.

The finding comes from a new study of Australian bearded dragons (not fire-breathing ones from fiction, unfortunately), published Thursday in the journal Science. And it suggests that sleep may be more ancient and more widespread than we thought.

"The status quo, until our study, was that these features of sleep only exist in mammals and in birds," neuroscientist Gilles Laurent told the Christian Science Monitor. Laurent is the director for the Max Planck Institute for Brain Research in Frankfurt, Germany, and an author on the new paper. Although birds, mammals and reptiles share a common ancestor - birds, being descendants of dinosaurs, are actually more closely related to lizards than they are to us - it was thought that the former two may have evolved their sleep patterns independently, since reptiles didn't seem to share it.

But when Laurent and his colleagues hooked their bearded dragons up to a electroencephalogram (EEG), they found that they exhibited the same cycles as their avian and mammalian relatives. During one phase, their brains were as active as if they were awake, their blood pressure rose and their eyes moved rapidly under their lids - that's REM sleep, when dreams are thought to flourish. During the deeper, slow-wave phase, the brain was dominated by low-frequency, high-amplitude waves of electrical activity, interrupted by occasional sharp bursts of neurons firing. In humans, this is thought to be the memory-consolidating portion of sleep.

As the researchers note in their paper, the idea that a phenomenon as complex as sleep evolved three different times seems less plausible than the suggestion it came from a common ancestor. The more likely explanation is that sleep as we know it - the complex, many-phased activity that's thought to help rejuvenate our bodies and strengthen our brains - evolved some 320 million years ago with one of our long-dead relatives.

If that is the case, then the sleep patterns exhibited in bearded dragons could be akin to the ancient, ancestral version.

"They are simpler, which is another good correlate of being ancient," Laurent told the Christian Science Monitor. "In general, through evolution things become more complicated."

The dragons went through about 350 80-second cycles per night, whereas humans undergo four or five 90-minute ones. Their brain activity during slow-wave sleep was coordinated in a more primitive part of the brain, the dorsal ventricular ridge. In mammals, it occurs in the hippocampus.

If reptiles go through REM sleep, does that mean they're also dreaming? It'll take more study - and possibly an interview with a dragon - to definitively say. But Laurent says it's not unlikely.

"If you forced me to speculate and to use a loose definition of dreaming, I'd speculate that those dreams are about recent notable events," he told Reuters. "Insects, maybe a place where there are good insects, an aggressive male in the next terrarium, et cetera."

"If I were an Australian dragon living in Frankfurt," he added, "I'd be dreaming of a warm day in the sun."