"The Rapist Is You!": Tunisian Women Perform Chilean Song Against Rape

"We are here to denounce all forms of violence... social, institutional (and) domestic violence" said participant Shames Radouani. 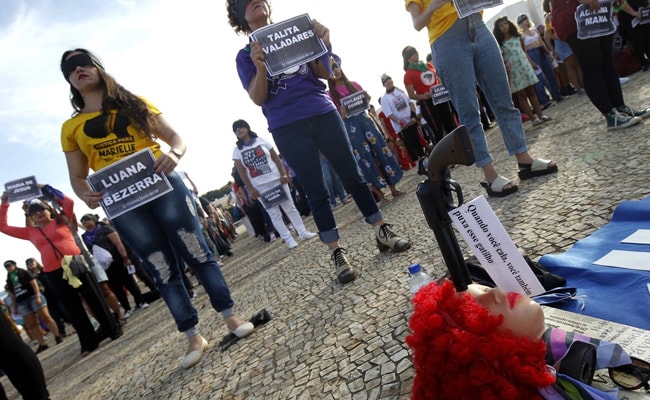 The group of women performed "The rapist is you!" in Tunis.

Around 60 Tunisian women on Saturday performed the feminist flash-mob song "The rapist is you!", a Chilean creation that went global, in front of the seat of government in Tunis.

"We are here to denounce all forms of violence... social, institutional (and) domestic violence" said participant Shames Radouani.

The Tunisian event comes as numerous women in the North African nation have complained of sexual harassment on social media, under the hash-tag #EnaZeda -- the local incarnation of the #MeToo movement.

The lawmaker, Zouheir Makhlouf, said he is diabetic and had been urinating into a bottle.

He walked free after being investigated for alleged sexual harassment and public indecency.

Launched in late November in Chile by feminist collective Las Tesis, the anthem against violence "The rapist is you!" is a very visual dance, involving wearing a black blindfold and a scarf.

The women arrange themselves in line, singing their refusal to tolerate excuses for unwanted sexual advances, culminating in the words "the rapist is you!", sung with accusing fingers pointed forwards.

The mobilisation in Tunis on Saturday follows dozens of similar performances around the world, including in Paris, Madrid, Beirut and New York.

The Tunisian activists who took part in the flash-mob performance were responding to a call by local feminist group "Falgatna", an AFP journalist said.