A Popcorn Seller Has Caught The Attention Of Pakistan Air Force

Muhammad Fayyaz insists he flew his plane and his claim is being taken seriously by the Pakistani Air Force, whose representatives have visited him multiple times, even issuing a certificate to commend his work, he revealed.

The engine is from a roadcutter, the wings are burlap, the wheels are borrowed from a rickshaw: a popcorn seller has caught the attention of the Pakistan Air Force by building his own plane.

The tale of Muhammad Fayyaz has captured the hearts of many in a nation where millions, just like him, have limited access to education and are fighting for opportunities.

"I was literally in the air. I couldn't feel anything else," Fayyaz said of his first flight in a machine he learned to build mainly from viewing TV clips and online blueprints.

Pakistan has been thrilled before by stories of scientific prodigies plucked from obscurity before -- notably, that of the engineer who said in 2012 that he had invented a car that could run on water -- a story that was later debunked by scientists. 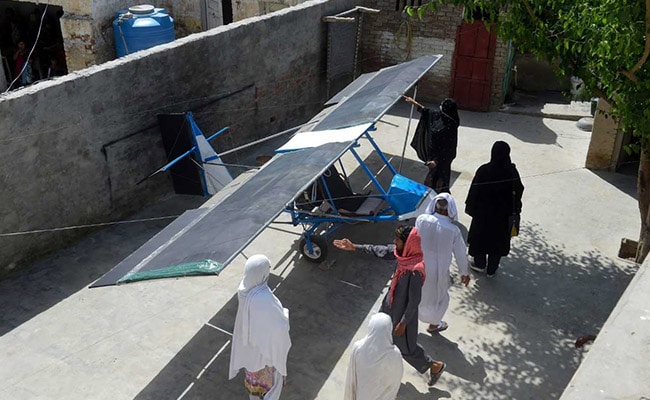 The engine is from a roadcutter, the wings are burlap, the wheels are borrowed from a rickshaw.

But Fayyaz insists he flew and his claim is being taken seriously by the air force, whose representatives have now visited him multiple times, even issuing a certificate to commend his work, he revealed.

There has been a steady stream of visitors wanting to view his creation, which now sits in the empty courtyard of his three-room home in the village of Tabur in central Punjab province.

Dreaming of a jet plane

The 32-year-old said he had dreamed of joining the air force as a child, but his father died while he was in still in school, forcing him to drop out at the eighth grade and do odd jobs to feed his mother and his five younger siblings.

As an adult, his passion for flying remained undiminished, so he took a wild gamble on a new dream and put everything he had into creating his own craft. 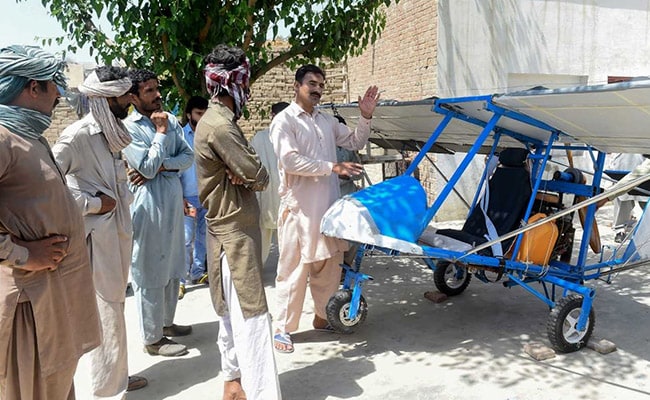 There has been a steady stream of visitors wanting to view Muhammad Fayyaz's creation.

By day he worked as a popcorn seller, by night as a security guard, saving every rupee he could.

The first thing he had to acquire was information -- beginning with watching episodes of the National Geographic Channel's Air Crash Investigation for insight into thrust, air pressure, torque, propulsion.

Cheap internet access in a nearby city helped fill the gaps, with Fayyaz claiming he spliced blueprints of planes he found online for his own creation.

He used his meagre funds creatively, buying burlap sacks wholesale and persuading a kind workshop employee who had seen him scouting for materials to build him a propeller.

There was trial and error. Some equipment needed to be replaced, designs had to be altered, the wiring had to be reworked.

His family worried he was obsessed.

But Fayyaz kept going. And, at the end of it all produced a plane -- tiny, fragile, and painted a bright blue.

'Locked up with criminals'

In February this year, he said, after more than two years of ridicule, he was ready.

Fayyaz claims his friends helped him to block a small road which he used as a runway for that first flight attempt in February.

The plane reached 120kph before taking off, Ameer Hussain, a witness who claims to have ridden alongside the plane in a motorcycle, told AFP.

"It was between two and two and half feet off the ground," he said. "It flew for about two to three kilometres before landing."

AFP has been unable to verify the claim.

But the attempt made Fayyaz bold enough to want to try again in front of the rest of his village, many of whom had mocked his efforts.

He picked March 23, Pakistan Day, for the unveiling. Police said hundreds of people crowded around his tiny plane, many clutching national flags.

But before Fayyaz could even start the engine, the police arrived and arrested him, confiscating his plane.

"I felt as though I had committed one of the worst acts in the world, as though I am the worst person in Pakistan," he explained, adding: "I had been locked up with criminals."

When AFP visited the local police station, officers said they had arrested Fayyaz as his plane was a safety threat.

Officer Zafar Iqbal explained: "The plane was returned to him as a goodwill gesture. Should he obtain a flying license or permit, he is free to fly."

Fayyaz's misfortune resulted in social media fame, and he was called a "hero" and an "inspiration" by some netizens.

Representatives from the Pakistan Air Force have made two visits to view the plane and the commander of a nearby base issued him a certificate which praises his "passion and dexterity" in building what it described as a "mini basic airplane".