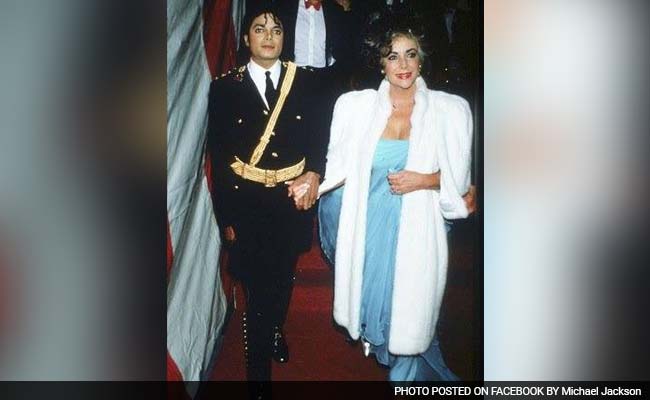 Terrorists have attacked New York City. So Michael Jackson, Elizabeth Taylor and Marlon Brando pile into a car and get the heck out of there, stopping at fast food joints as they trek across the country.

This is not a Mad Lib. This reported account will be depicted in an upcoming Sky Arts movie called "Elizabeth, Michael & Marlon." Michael Jackson -- arguably the most famous black musician of all time -- will be played by white British actor Joseph Fiennes, for some reason.

Whether this 9/11 escape road trip actually happened has been the subject of rumor and debate ever since Vanity Fair published the account in 2011.

Here's what we do know: Michael Jackson played Madison Square Garden on Sept. 7 and 10, 2011, for 30th-anniversary concerts. A lot of very famous people in Jackson's orbit were around for the star-studded events, including Whitney Houston, Eminem, Yoko Ono, Liza Minnelli, and yes, Taylor and Brando.

Five minutes into the first concert "the darkened stage was lit to reveal Marlon Brando, sitting in silence on a leather chair, wearing dark glasses and a suit and fiddling with his watch, apparently oblivious to some 20,000 fans," The Washington Post reported at the time. "When the actor finally spoke, he delivered a grumpy, half-comprehensible lecture about the 'hundreds, if not thousands of children' being starved and hacked to death in some foreign land.

Michael Jackson, he gravely intoned, is one of the few souls out there trying to help."

"It was a harangue that might merely have seemed inappropriately timed if it were audible. All cheer in the room vanished, replaced first by startled quiet, followed shortly by anger and a hail of boos. 'Stella!' hooted a wag."

During a series of tributes, "Michael sat like a Roman emperor in a lit booth near the side of the stage and air-kissed the performers," The Post relayed. Taylor and Macaulay Culkin flanked him.

The morning after the final Jackson concert, the Twin Towers fell. Chaos gripped Manhattan. Planes were grounded. And, according to Sam Kashner's Vanity Fair piece "Elizabeth Taylor's Closing Act," Jackson "hollered down the hallway of his hotel for everyone in his entourage, and for Brando, to leave immediately;" Taylor was staying in a nearby hotel.

From the Vanity Fair piece:

"Now here's where the story gets complicated. In one version, these three towering icons of American pop culture planned their escape, afraid that they would be the next target. Michael and Brando had trouble leaving their hotel garage because fans kept banging on the car windows, following them down the street, screaming. Unable to fly, they drove out of the city."

Former child star Corey Feldman told Kashner that he had gotten into an argument with his friend, Jackson, the night before, and that on Sept. 11 the pop megastar was "trying to get Elizabeth out! He was looking for a private jet." The piece continues:

"A former employee of Michael Jackson's says that Michael, like General Washington, led his entourage to a temporary safe haven in New Jersey, before the three superstars took to the open road.

'They actually got as far as Ohio - all three of them, in a car they drove themselves!' he recalls. Brando allegedly annoyed his traveling companions by insisting on stopping at nearly every KFC and Burger King they passed along the highway. One can only imagine the shock their appearance caused at gas stations and rest stops across America."

But this account was debunked by another anonymous source, one of Taylor's "close friends and assistants" who insisted to Kashner that she remained in New York City, "went to a church to pray, and she went to an armory where people were who couldn't get home or who'd stayed behind to look for the missing. She also went down to Ground Zero, where she met with first responders. Eventually, the airports opened and she flew home."

As Kashner notes, nothing bubbled up in any news accounts at the time about Taylor tending to the stranded or visiting at Ground Zero.
Unfortunately, all three protagonists are no longer around to confirm or deny this entire episode.

If you're thinking, "Man, this would make for a great premise for a piece of fiction," you're too late. Zadie Smith beat you to it last year with her short story "Escape from New York." In the piece, Brando says to Jackson, "I hear you drive like a maniac." It continues:

"I do go fast, Marlon, but I also stay in control. You can trust me, Marlon. I promise I will get us out of here."

Fiennes, speaking to WENN, described the upcoming movie as "a story, possibly an urban legend whereby Michael, Marlon Brando, and Liz Taylor were all together the day before 9/11 doing a concert. Airspace was shut down and they couldn't get out and Michael had the bright idea to go to hire a car and drive."

He continued: "So the three of them got in a car and drove 500 miles to Los Angeles. It took them a while because they had to stop at a lot of Burger Kings for Marlon; but they got out!"
Oh, and it'll be a comedy.