The 63-year-old farmer had stepped into a grain auger, the blade violently twisting and twirling to carry corn to a storage bin on his farm in northeastern Nebraska. 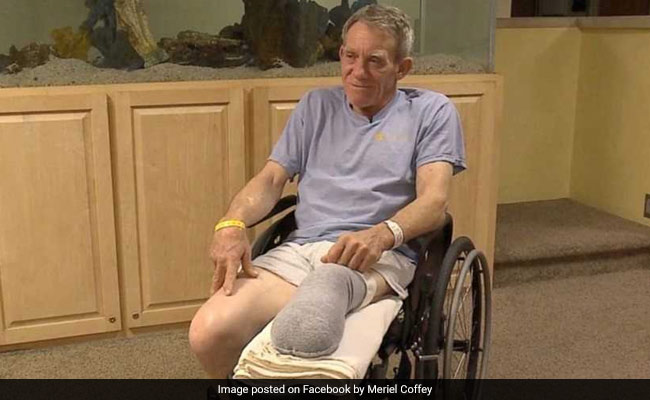 Kurt Kaser severed his leg in a desperate attempt to free himself.

Kurt Kaser had no time to consider his options.

The 63-year-old farmer had stepped into a grain auger, the blade violently twisting and twirling to carry corn to a storage bin on his farm in northeastern Nebraska - and, in an instant, his left foot was sucked into the machine. He scrambled as the corkscrew-style blade inside cut off his foot and continued to pull at him, leaving him to wonder when or whether it would stop, he said.

"I can remember telling myself, 'This is not good. This is bad,' " he recounted Monday in a phone interview with The Washington Post.

"I just dropped to the ground and started pulling on my leg to try to get it out, but it wouldn't come," Kaser added, explaining that he knew he could not lie there and wait for help. "I didn't know how long it would be before someone would show up. I didn't know how long I would stay conscious."

Kaser was all alone on the property and said he searched his pockets for his cellphone, but it wasn't there. Thinking back, he said, he wonders whether it had fallen into the grain.

So, he said, he pulled out his pocketknife and tried to finish the job - severing his leg in a desperate attempt to free himself, he said.

Until that point, it had been a typical day for Kaser, who was working on his 1,500-acre farm outside Pender, a small town less than 100 miles from Omaha. It was early afternoon on Good Friday - April 19 - and Kaser was moving grain from one bin to another when he got caught in the auger, he said.

A grain auger is a machine containing a spiral steel blade that rotates, pulling grain up through a long tube into a nearby storage bin. The blade is more exposed near the end of the auger, but there is often a wire screen that covers the blade, keeping other things from being pulled into the machine.

Kaser said he had forgotten that, over the winter, he had cut a small hole in that protective screen to get it to work under frozen ground. When he put his foot down on it last month, he said, he slipped right through the opening and onto the spinning blade.

Still, during the ordeal - watching his leg get mangled in the machinery and then having to cut off what was left of it, feeling the pops and sharp pains as he severed his own nerves - Kaser said he wasn't afraid. "I was just mad at myself because I knew what my mistake was - cutting that hole in the screen and stepping in it," he said.

Once Kaser was free, he said, he crawled on his elbows to his office a couple hundred feet away and called his son, who is a volunteer with the local fire and rescue department.

Kaser was rushed to a nearby hospital and then transported by helicopter to the Bryan Trauma Center at Bryan West Campus in Lincoln, Nebraska, where one of his daughters is a trauma nurse, he said.

Stanley Okosun, a trauma surgeon and medical director of the Bryan Trauma Center, was on call when Kaser was brought into the hospital. He said the farmer had a very severe and dirty wound from dragging himself on the ground to call for help, so the medical team aggressively treated him with antibiotics and rushed him into surgery.

Okosun said that although Kaser had basically amputated his own leg, surgeons performed a proper amputation, midway between Kaser's knee and his ankle on his left leg.

Okosun said he's been a surgeon for about 15 years and has never seen a case like it.

"He was his own 911, his own pre-hospital, his own surgeon," the surgeon said about Kaser. "He saved his own life," he added, "and he made it very easy for us to treat him."

Okosun called Kaser "a very strong-willed guy who did what he needed to do to survive."

After a week in the hospital and a couple weeks in a rehabilitation center, Kaser said he is recovering at home. He said doctors told him it will be six to eight months before he can be fitted with a prosthetic - but once he is, he plans to get right back to work. Except this time, he said, he will be more mindful.

Kaser said that he hopes his story "helps anybody in any way."

He said he is "discouraged a little," but glad he's alive and will be able to walk again. "I feel fortunate that it was no worse than it was," he said.

(Except for the headline, this story has not been edited by NDTV staff and is published from a syndicated feed.)
Comments
Nebraska farmerKurt Kasergrain auger