Thailand To Export Insects To EU For Human Consumption 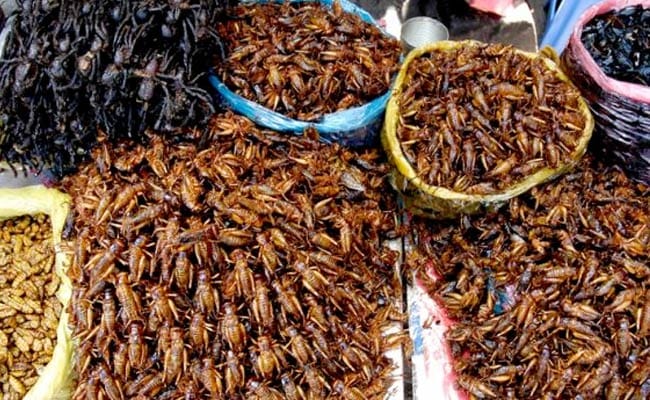 Currently, some 112 countries in Asia, Europe, Africa, the Americas and Oceania indulge in entomophagy

Bangkok: Thai firms are set to export insects for human consumption to the European Union (EU), authorities said on Thursday.

Thailand, among the world's largest consumers of insects, has some 20,000 insect farms, and products made from these invertebrates are also sold in processed forms such as fried crickets or cricket flour, Efe news reported.

A new European legislation will allow the sale of insects for human consumption from 2018 onwards - although countries such as Belgium, Holland and Denmark have already independently approved such sales.

According to European law, the European Food Safety Authority will evaluate every new kind of food, including insects, before the EU approves their commercialisation, a process that can take months.

Some of the Thai products that could reach the European supermarkets are Bugsolutely pasta (with 20 per cent cricket flour) and Hi-So's packaged fried silkworms that are consumed in Thailand, Myanmar, Cambodia and Laos.

"From January 2018 onwards, the regulation on new food products in the EU will be in effect. We hope some of the insects will reach the European market the same year," Bangkok-based Bugsolutely's co-founder Massimo Reverberi told EFE.

"Insects like crickets will easily get the green light because it has been consumed in many countries for many years, while for others like scorpions it will be more difficult," he explained.

Mr Reverberi believes Asia leads the insect production market for human consumption, although there are emerging initiatives from countries such as Mexico and Brazil too.

The Food and Agriculture Organisation (FAO) has for years recommended the consumption of insects such as crickets and grasshoppers owing to their high protein, vitamin and mineral content.

Experts even consider insects as a more sustainable solution to feed the world's population of nine billion people, forecast for 2050.

Promoted
Listen to the latest songs, only on JioSaavn.com
Currently, some 112 countries in Asia, Europe, Africa, the Americas and Oceania indulge in entomophagy, or the consumption of insects, extending to a variety of 1,500 species, according to FAO.

Insects, however, continue to remain expensive as compared to other meat such as chicken - however, this could reverse with large scale production.