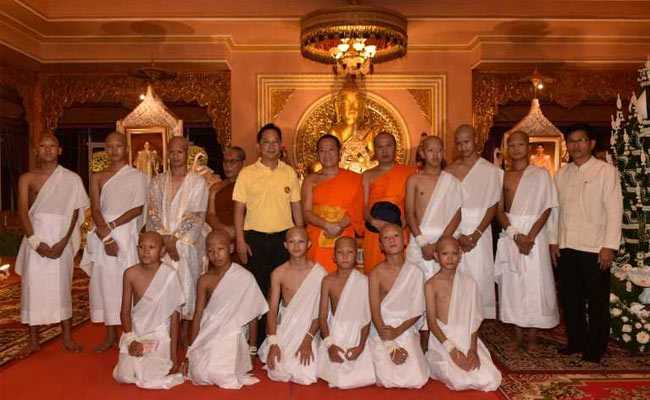 Thai boys rescued from deep inside a flooded cave in a dramatic mission had their heads shaved Tuesday before a Buddhist ordination ceremony in honour of a diver who died during the operation.

The saga of the "Wild Boars" football team transfixed the world as divers worked to get them out of the Tham Luang cave where they spent up to 18 days.

The 12 boys and their coach were sedated and carried through the waterlogged chambers by the divers. After recuperating in hospital for a week they were sent home with clean bills of health.

Now eleven of the footballers are preparing to live as novice monks and stay in monasteries for nine days to "make merit" for former Thai Navy SEAL diver Saman Kunan, who died while installing oxygen tanks along the rescue route.

"It's something we've been thinking to do since they got out of the cave," Aisha Wiboonrungrueang,  mother of 11-year-old Chanin, told AFP. "Now it's about time."

Their coach will also enter the monkhood as an adult. One player, Adul Sam-on, attended the event but will not be ordained as he is a Christian.

They had their heads shaved and sat on the floor in the monastery where they prayed together.

Chanin's mother said the purpose of the ceremony was also to appease local spirits and sacred beings believed to protect the mountains and people in the north.

Thailand is a majority Buddhist country but the faith blends with regional rituals and traditions.

Authorities have told the media to give the teammates time to adjust to their lives. But interest remains high both in and outside Thailand, where production houses are looking to make a Hollywood-style film.

Closer to home they have also been an inspiration.

Chinnakorn Kuadchaiyaphum, an 11-year-old student, travelled to the monastery just to get a glimpse of the team.

"I came here to see (the Wild Boars) brothers... I admire them because they are really strong. They survived in the cave for many days," he told AFP.

After entering Tham Luang following football practice on June 23, the children and coach were quickly pushed deeper inside by monsoon flooding, and were only found nine days later on a ledge by British divers.

They had no food and survived on rainwater dripping from rocks.

The experts involved in the rescue mission which began days later were not sure it could succeed, and Saman Kunan died in the planning stages, highlighting the difficulty.

But all made it out safely. While experts have warned of lingering trauma, officials and families have reported a drumbeat of good news since they returned.