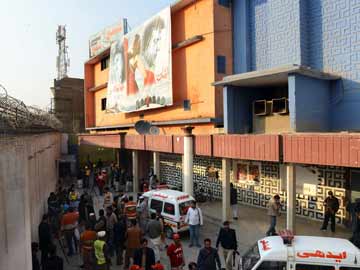 Pakistani security officials and volunteers gather outside the Shama cinema after a grenade attack in Peshawar.

Peshawar: At least 10 people were killed and 16 others wounded in a grenade attack at a cinema in Pakistan's restive northwest city of Peshawar on Tuesday, officials said.

The incident at the Shama cinema, known for showing pornographic films in one of its auditoriums, came 11 days after a similar attack in another movie theatre in the same city.

"Initially we can say two blasts inside one of the halls of Shama cinema were caused by hand grenades," senior police official Najib-ur-Rehman told AFP.

"Ten people were killed and 16 others were wounded in the attack."

Promoted
Listen to the latest songs, only on JioSaavn.com
An official at Peshawar's Lady Reading Hospital, Syed Jameel Shah, confirmed the death toll.

Peshawar, the capital of restive Khyber Pakhtunkhwa province and close to the Taliban-infested tribal areas, has been on the front line of Pakistan's homegrown Islamist insurgency which has claimed thousands of lives.