She stated that the room was divided by wire fencing into three cages, with each one holding 20 separated girls - some as young as 3 years old. 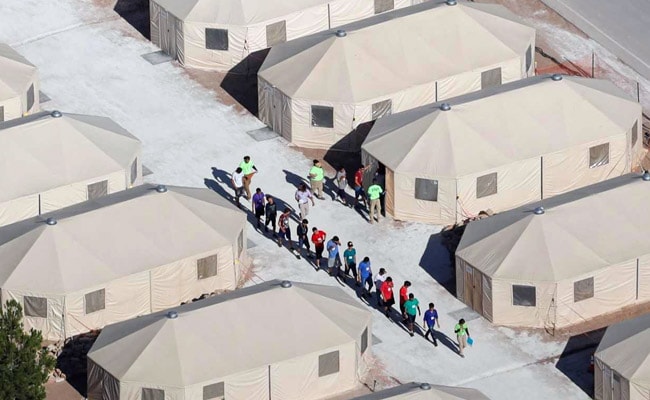 The girl's affidavit also stated that they were denied phone calls and proper care. (Representational)

A 15-year-old girl who was forcibly separated from her mother after fleeing to the U.S. from El Salvador described to a Washington State investigator how she was crammed into a windowless room with 60 other girls and deprived of proper sleep or food for three days.

The room was divided by wire fencing into three cages, with each one holding 20 separated girls - some as young as 3 years old, according to an affidavit filed late Monday in federal court in Seattle. The girls, who weren't told when they'd see their parents again, called it the "icebox."

"The place was freezing because they kept the air conditioner on all the time, and each child was given a mat and an aluminum blanket," the investigator for Washington Attorney General Bob Ferguson wrote. "The girls placed their mats in the floor very close to one another, since there was not enough space."

The affidavit is part of a lawsuit by 17 states and the District of Columbia that seeks to block the child-separation policy on constitutional grounds. The states on Monday asked the court to order the government to begin quickly turning over evidence.

"The states have repeatedly demanded basic information about their well-being, but were answered with silence," according to the filing.

More than 2,000 children were taken under the Trump administration's zero-tolerance policy for prosecuting illegal border crossings and sent to states across the U.S. President Donald Trump issued an executive order to halt the practice started by Attorney General Jeff Sessions, but the directive may conflict with the zero-tolerance policy. The administration, which hasn't yet answered the suit, didn't immediately respond to a request for comment.

The girl from El Salvador, identified as "G" in the filing, said agents kicked their mats daily at 4 a.m. to count them, and woke them again for meager meals. The guards refused to provide comfort to the youngest detainees and wouldn't allow them to make phone calls, according to the filing.

Maricela Batres, a mother from El Salvador whose 8-year-old son was taken in May, described in another affidavit how she fled to the U.S. after the MS-13 gang threatened to kill them if she didn't pay $300 a month as "rent" for the store she ran - money she didn't have.

Immigration agents detained Batres and her son at the border and put them in what she called a "kennel," where they slept on the ground with aluminum blankets. That's when she and others were informed their children would be taken away, she said.

"One said, 'It is the price to pay for crossing the border,"' she said.

New York Attorney General Barbara Underwood described in a filing how a distraught boy from South America was rushed to a hospital after trying to jump out of a second-story window in the group home where he was being held. At least 300 children were moved to New York, she said.