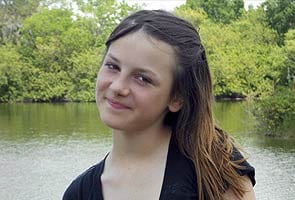 An undated handout photo of Rebecca Sedwick, a 12-year-old who law enforcement believe jumped to her death at an old cement business in Lakeland, Florida

Miami: The clues were buried in her bedroom. Before leaving for school on Monday morning, Rebecca Ann Sedwick had hidden her school books under a pile of clothes and left her cellphone behind, a rare lapse for a 12-year-old girl.

Inside her phone's virtual world, she had changed her user name on Kik Messenger, a cellphone application, to "That Dead Girl" and delivered a message to two friends, saying goodbye forever. Then she climbed a platform at an abandoned cement plant near her home in the Central Florida city of Lakeland and leaped to the ground, the Polk County sheriff said.

In jumping, Rebecca became one of the youngest members of a growing list of children and teenagers apparently driven to suicide, at least in part, after being maligned, threatened and taunted online, mostly through a new collection of texting and photo-sharing cellphone applications. Her suicide raises new questions about the proliferation and popularity of these applications and websites among children and the ability of parents to keep up with their children's online relationships.

For more than a year, Rebecca, pretty and smart, was cyberbullied by a coterie of 15 middle-school children who urged her to kill herself, her mother said. The Polk County sheriff's office is investigating the role of cyberbullying in the suicide and considering filing charges against the middle-school students who apparently barraged Rebecca with hostile text messages. Florida passed a law this year making it easier to bring felony charges in online bullying cases.

Rebecca was "absolutely terrorized on social media," Sheriff Grady Judd of Polk County said at a news conference this week.

Along with her grief, Rebecca's mother, Tricia Norman, faces the frustration of wondering what else she could have done. She complained to school officials for several months about the bullying, and when little changed, she pulled Rebecca out of school. She closed down her daughter's Facebook page and took her cellphone away. She changed her number. Rebecca was so distraught in December that she began to cut herself, so her mother had her hospitalized and got her counseling. As best she could, Norman said, she kept tabs on Rebecca's social media footprint.

It all seemed to be working, she said. Rebecca appeared content at her new school as a seventh-grader. She was gearing up to audition for chorus and was considering slipping into her cheerleading uniform once again. But unknown to her mother, Rebecca had recently signed on to new applications - ask.fm, and Kik and Voxer - which kick-started the messaging and bullying once again.

"I had never even heard of them; I did go through her phone but didn't even know," said Norman, 42, who works in customer service. "I had no reason to even think that anything was going on. She was laughing and joking."

Judd said Rebecca had been using these messaging applications to send and receive texts and photographs. His office showed Norman the messages and photos, including one of Rebecca with razor blades on her arms and cuts on her body. The texts were full of hate, her mother said: "Why are you still alive?" "You're ugly."

One said, "Can u die please?" To which Rebecca responded, with a flash of resilience, "Nope but I can live."

Her family said the bullying began with a dispute over a boy Rebecca dated for a while. But Rebecca had stopped seeing him, they said.

Rebecca was not nearly as resilient as she was letting on. Not long before her death, she had clicked on questions online that explored suicide. "How many Advil do you have to take to die?"

In hindsight, Norman wonders whether Rebecca kept her distress from her family because she feared her mother might take away her cellphone again.

"Maybe she thought she could handle it on her own," Norman said.

It is impossible to be certain what role the online abuse may have played in her death. But cyberbullying experts said cellphone messaging applications are proliferating so quickly that it is increasingly difficult for parents to keep pace with their children's complex digital lives.

"It's a whole new culture, and the thing is that as adults, we don't know anything about it because it's changing every single day," said Denise Marzullo, the chief executive of Mental Health America of Northeast Florida in Jacksonville, who works with the schools there on bullying issues.

No sooner has a parent deciphered Facebook or Twitter or Instagram than his or her children have migrated to the latest frontier. "It's all of these small ones where all this is happening," Marzullo said.

In Britain, a number of suicides by young people have been linked to ask.fm, and online petitions have been started there and here to make the site more responsive to bullying. The company ultimately responded this year by introducing an easy-to-see button to report bullying and saying it would hire more moderators.

"You hear about this all the time," Norman said of cyberbullying. "I never, ever thought it would happen to me or my daughter."

Questions have also been raised about whether Rebecca's old school, Crystal Lake Middle School, did enough last year to help stop the bullying; some of it, including pushing and hitting, took place on school grounds. The same students also appear to be involved in sending out the hate-filled online messages away from school, something schools also can address.

Nancy Woolcock, the assistant superintendent in charge of anti-bullying programs for Polk County Schools, said the school received one bullying complaint from Rebecca and her mother in December about traditional bullying, not cyberbullying. After law enforcement investigated, Rebecca's class schedule was changed. Woolcock said the school also has an extensive anti-bullying campaign and takes reports seriously.

But Norman said the school should have done more. Officials told her that Rebecca would receive an escort as she switched classes, but that did not happen, she said.

Rebecca never boarded her school bus on Monday morning. She made her way to the abandoned Cemex plant about 10 minutes away from her modest mobile home; the plant was a place she had used as a getaway a few times when she wanted to vanish. Somehow, she got past the high chain-link fence topped with barbed wire, which is now a memorial, with teddy bears, candles and balloons. She climbed a tower and then jumped.