The world's richest people are growing even richer, even faster, as the coronavirus pandemic upends the global economy and drives ever more activity online. 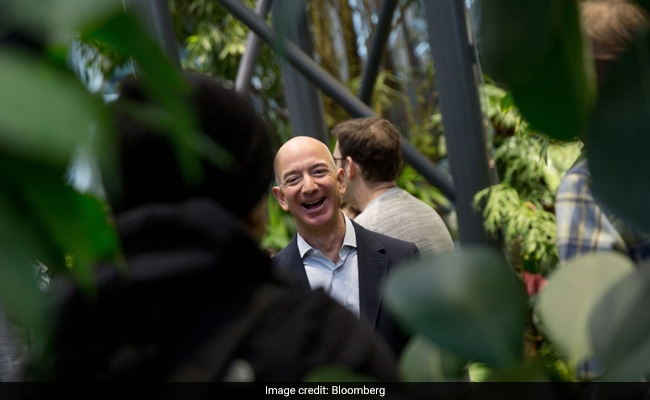 Amazon.com Inc. founder Jeff Bezos has seen his net worth soar by $63.6 billion this year.

The message from Jeff Bezos: Big Tech's not so powerful.

The message from his personal fortune: Oh yes it is.

As Bezos and three other technology magnates prepare to defend their businesses at a Congressional hearing on antitrust worries Wednesday, their fast-growing wealth provides a breathtaking measure of their companies' economic might. The Amazon.com Inc. founder has seen his net worth soar by $63.6 billion this year. On one day this month, it leaped an unprecedented $13 billion. The world's richest man is now on the cusp of another record: a fortune exceeding $200 billion, according to the Bloomberg Billionaires Index.

Another chief executive officer set to testify, Mark Zuckerberg of Facebook Inc., has grown $9.1 billion richer this year, placing his fortune within reach of the centibillionaire status already held by Bezos and Bill Gates.

The mind-boggling accumulation of money underway in technology is unrivaled in speed and scale. No other group of executives has prospered to such a degree. Indeed, the world's richest people are growing even richer, even faster, as the coronavirus pandemic upends the global economy and drives ever more activity online.

"We moved the brick-and-mortar economy to an online economy dramatically," said Luigi Zingales, a finance professor at the University of Chicago Booth School of Business. "Probably the same thing would have happened in a longer period of time. Now it's happening in weeks instead of years."

The hearing will be held by video conference and also features Tim Cook and Sundar Pichai, the CEOs of Apple Inc. and Google parent Alphabet Inc. It's poised to be a combative affair as lawmakers express heightened frustration with how the industry wields its clout.

Bezos's stance will be that his company is an American success story that achieved its position through risk-taking and a relentless focus on customers, according to his prepared testimony. He will tell his personal story and that of his parents, who invested in what would become the world's largest online retailer.

The collective wealth of tech billionaires in Bloomberg's index, a ranking of the world's 500 richest people, has nearly doubled since 2016, from $751 billion to $1.4 trillion today. That's faster than in every other sector.

Seven of the world's 10 richest people derive the bulk of their fortune from technology holdings, with a combined net worth of $666 billion, up $147 billion this year. 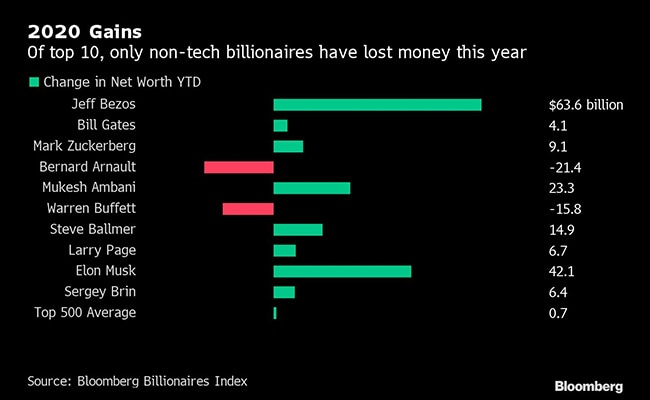 Big winners so far in 2020 include Elon Musk, whose net worth has more than doubled to $69.7 billion on the back of surging Tesla Inc shares.

Microsoft Corp. co-founder Gates and former CEO Steve Ballmer have also soared, long after they left the company. Indian billionaire Mukesh Ambani, whose fortune is tied up in the world's largest oil refinery -- has also profited from the shift online. Shares of Reliance Industries Ltd., the conglomerate he controls, have risen 45% this year as the company has expanded into digital and retail businesses, making him the fifth richest person in the world.

Among the top 10, only two have seen their wealth decline in 2020: luxury mogul Bernard Arnault and Berkshire Hathaway Inc.'s Warren Buffett. While tech has surged, more than 200 of the 500 billionaires tracked by Bloomberg have lost money this year. 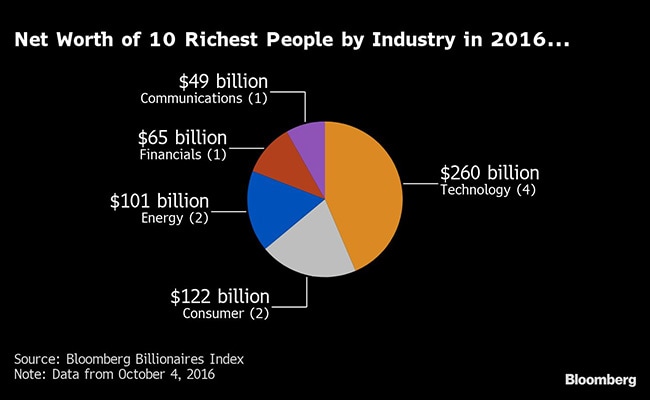 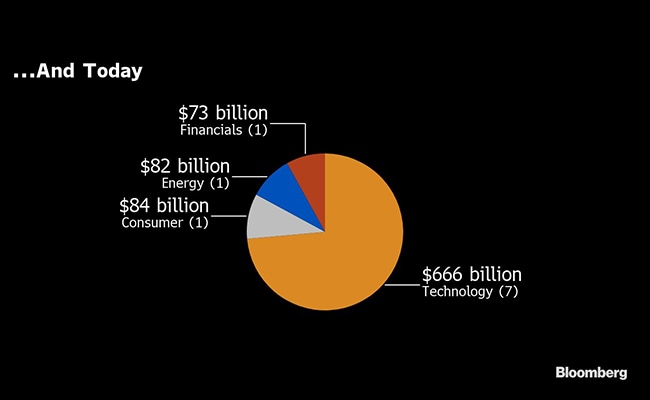 Giant tech companies control the infrastructure of the digital economy in a similar vein to how Gilded Age trusts monopolized America's industrial economy at the turn of the 20th century. Yet in 1900, the five largest U.S. companies had combined market values that equaled less than 6% of the nation's economy, according to estimates by Massachusetts Institute of Technology economist Daron Acemoglu.

Currently, five of the largest American tech companies -- Apple, Amazon, Alphabet, Facebook, and Microsoft -- have market valuations equivalent to about 30% of U.S. gross domestic product. That's almost double what they were at the end of 2018.

The economic power of the Robber Barons created a fiery counter-reaction, in violent labor unrest and the adoption of reforms that once seemed radical, like the Sherman Antitrust Act and a federal income tax. Compared to the political difficulties faced by John D. Rockefeller and other early 20th-century industrial magnates, government moves against Big Tech have been relatively mild. At least so far.

On the left, politicians including Alexandria Ocasio-Cortez and Bernie Sanders have delivered blistering attacks on widening inequality and the growing wealth of billionaires. Protesters have gathered outside Bezos's Manhattan penthouse, demanding a wealth tax. Facebook employees have spoken out about their employer's role in spreading disinformation and hate speech..

Monopolists like Rockefeller and Andrew Carnegie helped repair their public images with large-scale philanthropy, a move echoed in this new Gilded Age.

The Giving Pledge, a commitment to give away the majority of your wealth in your lifetime, was founded by Gates and Buffett. Zuckerberg also has stepped into the realm of philanthropy, establishing the Chan Zuckerberg Initiative, or CZI, in 2015 with a goal to "advance human potential and promote equality."

But even these acts have sparked criticism.

"The modern ultra-billionaire is someone who feels a right, in many cases, to privately govern the people of the United States," said Anand Giridharadas, author of "Winners Take All: The Elite Charade of Changing the World," an influential critique of billionaire philanthropy.

Gates's generosity and activism during the pandemic has earned him widespread praise, but it's also attracted conspiracy theorists suspicious of his motives. A YouGov and Yahoo News poll found that 44% of Republicans and 19% of Democrats believed Gates wanted to use vaccinations to give people tracking implants.

The criticism of Bezos also hasn't let up, even as his giving increased recently with a $10 billion commitment in February to fight climate change and a $100 million donation in April to the nonprofit Feeding America. When he made the announcements, his wealth had already grown by significantly more than those amounts this year. He hasn't signed the Giving Pledge.

MacKenzie Scott, Bezos's ex-wife, signed the pledge not long after the two announced their split. Scott said Tuesday that she has since donated $1.7 billion to several causes including racial equity, climate change and public health.

"There's no question in my mind that anyone's personal wealth is the product of a collective effort, and of social structures which present opportunities to some people, and obstacles to countless others," she said.

Big Tech companies have earned some grudging respect, even from critics, during the pandemic.

"We have been fortunate to have these digital technologies," said MIT's Acemoglu. "Without them, the fallout from the lockdowns and social distancing would have been worse."

That may come with a cost: "This is going to make the domination of tech companies over the economy and our social lives much worse, and it's going to significantly accelerate the trend toward greater automation," Acemoglu said. He warns that tech's rapid ascent may deepen inequality, shrink the number of good jobs, and weaken democracy. 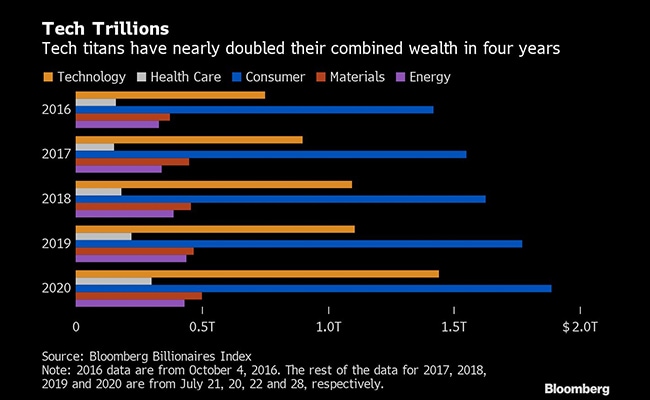 Such concerns could help shift Big Tech and its billionaires into the crosshairs of governments whose finances have been devastated by the pandemic. Heading into this year's U.S. presidential race, Elizabeth Warren and Sanders proposed wealth taxes on billionaires, an idea that polled well with voters.

Former Vice President Joe Biden, the presumptive Democratic nominee, hasn't embraced the wealth tax, but he's campaigning on higher rates on the rich and corporations, as well as the closing of estate-tax loopholes.

Absent a wealth tax or some other innovative new kind of levies, it will be difficult to tax the fortunes of Zuckerberg, Bezos and other tech billionaires. Much of their fortune is in the form of rising stock, which isn't taxed until it's sold.

"Billionaires are accumulating a huge amount of unrealized capital gains, on which they're not paying much -- if any -- tax," said University of California at Berkeley economics professor Gabriel Zucman, who helped Sanders and Warren develop their wealth-tax proposals.