Taliban talks should be Afghan led, no external interference: Krishna 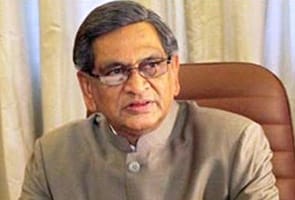 Kabul: In a clear pointer to Pakistan, India today said that any "external" interference in the transition process of Afghanistan will be detrimental to both its success and the future of the Afghan people.

Echoing India's views, Afghanistan said the peace process cannot succeed without being led by the Afghan people and noted that the process was fully controlled by it.

These views were expressed at a joint press conference here by External Affairs Minister S M Krishna and his Afghan counterpart Zalmay Rasool after their extensive talks on issues like terrorism in the region, security of Indians and various economic projects.

Though both leaders refrained from naming Pakistan, the message was clear for Islamabad, which has been pressing for a decisive role in the Afghan transition process.

They were asked about international concerns that the transition process might become Pakistan-brokered and not Afghan-driven.

"Any external interference in the reintegration process would be detrimental to its success and for the future of democratic, stable, pluralistic and prosperous Afghanistan," Krishna said.

Rasool said the peace process was from people of Afghanistan and insisted that it cannot succeed without being led by Afghan people.

Krishna, who also called on President Hamid Karzai, is here on a two-day visit to convey India's concerns over some aspects of the transition process in Afghanistan, including Karzai's move to provide representation to the Taliban over which New Delhi has serious reservation. India feels that such a move amounts to giving legitimacy to these elements.

The External Affairs Minister also asserted that despite security concerns, India will continue to provide developmental assistance as long as the Afghan government wants. He also noted that Afghanistan government has assured India of full security.

"India is not going to be cowed down by such threats. We will continue to remain in Afghanistan as long as the legitimately elected government of Afghanistan wants us...," Krishna said.

In February last year, seven Indians were killed in a Taliban suicide attack on foreigners in Kabul, which claimed 16 lives and left 20 people critically injured.

Ahead of his visit, the External Affairs Minister said that Indian missions in Afghanistan were under constant threat but the Afghan government has "fully assured" New Delhi of their security.

Noting that several lives have been lost due to attacks on Indian missions, Krishna said the government was working with the Afghan government to ensure that enough protection was provided to embassy and consulates to avoid any more casualties.

"We have been fully assured by President Hamid Karzai and his government of that (security)," he said yesterday. Apart from staff in missions, some 4,000 Indians are building roads, sanitation projects and power lines in this country. India is also building the new Afghan Parliament.

In February last year, seven Indians were killed in a Taliban suicide attack on foreigners in Kabul, which claimed 16 lives and left 20 people critically injured.

Besides its embassy in Kabul, India has consulates in Jalalabad, Kandahar, Mazar-e-Sharif and Herat.
Comments
hamid karzais m krishnataliban talkstaliban