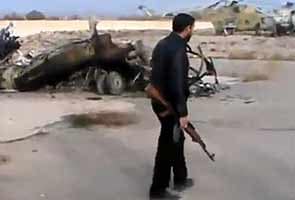 In this image taken from video obtained from the Ugarit News, which has been authenticated based on its contents and other AP reporting, Syrian rebels capture a helicopter air base near the capital Damascus after fierce fighting in Syria.

Beirut: Syrian rebels captured a helicopter base just outside Damascus on Sunday in what an activist called a "blow to the morale of the regime" near President Bashar Assad's seat of power, while the bombardment of a village near the capital killed at least eight children.

Activists said the children were killed when Syrian warplanes bombed the village of Deir al-Asafir just outside the Damascus. The village is close to suburbs of the capital that has been witnessing clashes, shelling and air raids between troops and rebels over the past months.

The Britain-based Syrian observatory for Human Rights said the bombardment of the village killed eight children. Another activist group, the Revolution Command Council said 10 children were killed when warplanes struck the village as they played outdoors.

An amateur video showed two girls lying dead in a street while the bodies of two bloodied dead boys were in the back seat of a car parked nearby. Several other wounded children were seen rushed for treatment.

Another video showed the bodies of two dead boys inside what appeared to be a makeshift hospital as others received treatment from injuries while lying on the floor.

The activist videos appeared genuine and corresponded to other AP reporting about the events depicted. Syria restricts the access of reporters.

The air base takeover claim showed how rebels are advancing in the area of the capital, though they are badly outgunned, making inroads where Assad's power was once unchallenged. Rebels have also been able to fire mortar rounds into Damascus recently.

The director of the Observatory, Rami Abdul-Rahman, said rebels seized control of the Marj al-Sultan base on the outskirts of Damascus on Sunday morning. He said at least 15 rebels and eight soldiers were killed in the fighting that started a day earlier. The rebels later withdrew from the base.

Rebels appear to be trying to take over air bases and destroy aircraft in order to prevent the regime from using them in attacks against opposition forces around the country.

The rebels have no protection against the attack helicopters and fighter jets that have been blasting their positions.

Rebels have been attacking air bases in different parts of Syria, mostly in the northern regions of Idlib and Aleppo.

In the battle at the base outside Damascus, Abdul-Rahman and Damascus-based activist Maath al-Shami said rebels destroyed two helicopters with rocket propelled grenades and captured a tank. They say the base, which is on the eastern outskirts of Damascus, houses several radar positions.

"This is a blow to the morale of the regime, because it is close to the heart of the capital," said Abdul-Rahman, referring to the base that is about 15 kilometers (10 miles) from Damascus.

Al-Shami said the rebels withdrew from the base after they captured some ammunition. He said they feared counterstrikes by regime aircraft.

The Observatory also reported violence in other parts of Syria, including the country's largest city of Aleppo in the north and the capital itself.

It said rebels on Sunday captured a training base for the Popular Front for the Liberation of Palestine-General Command near the Damascus suburb of Douma. The PFLP-GC is one of the Palestinian factions most loyal to Assad.

The PFLP-GC said in a statement late on Saturday that the base was under attack. It said that thousands of activists and fighters who fought against Israel were trained at the base over the past 30 years.

Also on Sunday, the Observatory said a bomb targeted a bus in the southern village of Othman, killing at least five people and wounding dozens. It said rebels and troops clashed in the southern region of Quneitra on the edge of the Israeli-occupied Golan Heights.

The Local Coordination Committees, another activist group, said residents found 12 bodies in the Damascus suburb of Daraya, scene of heavy clashes between rebels and government troops over the past few days.

State TV said troops clashed with Al Qaeda militants in Daraya, killing some of them and confiscating a mortar that they were using in their attacks.

Promoted
Listen to the latest songs, only on JioSaavn.com
The station said that troops killed an Al Qaeda affiliated Palestinian militant known as Abu Suhaib in the Damascus suburb of Hajira. It said his group was behind several bombings in Syria that killed and wounded dozens of people.

Assad's regime blames the revolt on a foreign conspiracy. It accuses Saudi Arabia and Qatar, along with the United States, other Western countries and Turkey, of funding, training and arming the rebels, whom it calls terrorists.