The virus has also crossed borders into Victoria and South Australia after an infectious team of furniture movers from Sydney visited both states for work. 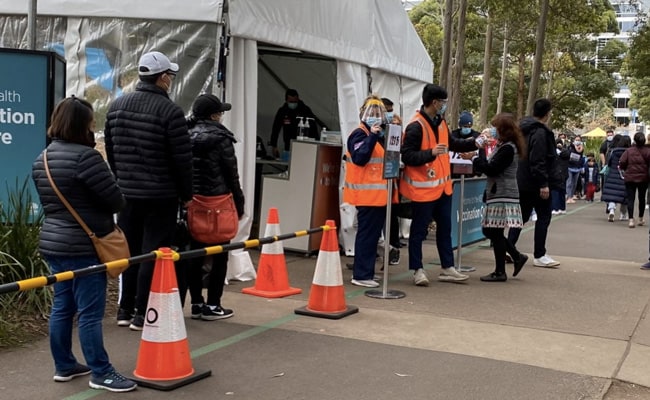 Australia reported a slowdown in new COVID-19 cases in Sydney on Thursday, while local media said Melbourne would follow it into lockdown as the outbreak of the highly contagious Delta variant threatens to take hold in the Victorian capital.

New South Wales state Premier Gladys Berejiklian said case numbers in Sydney would need to drop significantly for the city of 5 million to leave lockdown, given 28 out of the 65 new infections reported were people who were infectious while still active in the community.

"Whilst the case numbers are bouncing around, we are seeing a stabilisation. They are not growing exponentially," Berejiklian said in Sydney.

Berejiklian described the new case numbers as a "welcome drop", but warned infections could rise due to the growing number of people with the Delta strain moving around in the community, particularly in Sydney's south-west.

New South Wales officials said out of the more than 900 people who have been infected during the latest outbreak, 73 have been moved to hospital, with 19 people in intensive care. Two deaths have been reported, the first for the country this year.

Sydney's lockdown started on June 26 and will remain in place until at least July 30.

Melbourne was meanwhile expected to enter lockdown from midnight, the Australian Broadcasting Corp reported, after a team of furniture movers from neighbouring New South Wales travelled through Victoria state while infectious.

Authorities were yet to decide how long the lockdown in the city would last, the ABC added, without giving further details.

Victorian authorities did not immediately respond to a request for comment on the report.

Dozens of venues in Melbourne including a shopping centre, two public transport routes and a sporting club have been listed as virus-exposed locations, adding pressure on authorities to tighten restrictions.

On Wednesday, mandatory mask rules indoors were reintroduced for Victoria's more than 6 million residents after the state recorded 10 new cases.

Two additional cases were reported in Victoria on Thursday. Both people were spectators at an Australian Football League game held in Melbourne's main sports stadium, the MCG, last weekend.

"We're certainly confident we're right on the heels of this particular outbreak," said Victoria's coronavirus response commander, Jeroen Weimar, referring to the system of tracking those who may be exposed to the virus. Melbourne has been the Australian city hardest hit by the pandemic, and a new lockdown would be its fifth.

In South Australia, authorities have identified a third venue visited by the workers, while two regional towns in New South Wales, including one near the border with Victoria and about 500 kms (310 miles) southwest of Sydney, were on alert after the team stopped at service stations.

With just over 31,400 cases and 912 deaths since the pandemic began, Australia has handled the COVID-19 crisis better than many other developed countries although its sluggish immunisation drive has taken some of the shine off this success.

Just over 12% Australia's adult population of around 20.5 million have been fully vaccinated, with officials pointing to changing medical advice for vaccines and supply constraints.