Imran Ali, who was arrested by police yesterday, was produced before Judge Sajjad Ahmed today. The suspect, whose face was covered when he arrived at the court, was surrounded by officials of Punjab Elite Police Force. 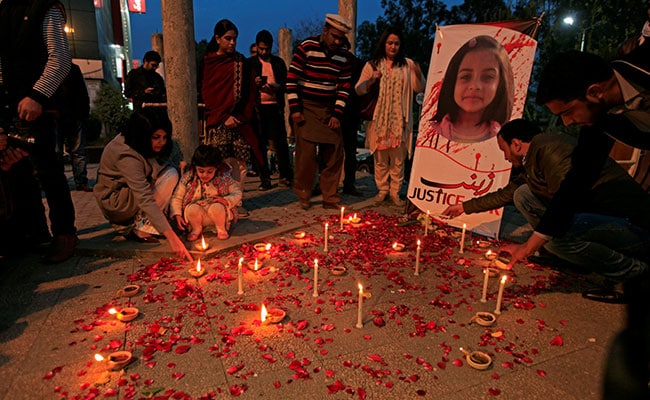 Rape and murder of seven-year-old had sent shockwaves across Pakistan.

Islamabad,: An Anti-Terrorism Court in Pakistan today granted investigators a 14-day physical remand of a 23-year-old man who was arrested in the brutal rape and murder case of a minor girl in Kasur city in Punjab province.

Imran Ali, who was arrested by police yesterday, was produced before Judge Sajjad Ahmed today. The suspect, whose face was covered when he arrived at the court, was surrounded by officials of Punjab Elite Police Force, Dawn reported.

State prosecutor Abdul Rauf Wattoo had requested the court for a 15-day physical remand so that investigators could interrogate the suspect, believed to be a serial murderer and rapist, about his alleged involvement in other similar cases.

Briefing the court, Wattoo said that police had learned that the suspect used to lure children by promising to buy them sweets, the paper said.

When the judge asked if he had any proof, Wattoo said that the suspect had been given a polygraph test that confirmed this claim.

When the court asked why the suspect was clean-shaven even though the initial CCTV footage showed a man with a beard, the prosecutor said that Imran had shaved his beard off after allegedly murdering the minor girl, the paper reported.

He told the court that the suspect's DNA matched the samples gathered from the crime scene.

Wattoo told the court that investigators had to test the DNA samples gathered from the crime scenes of seven previous incidents of the rape and murder of children in Kasur that occurred over the past year, the paper said.

After the court agreed to grant a 14-day remand, the suspect was taken to the Counter-Terrorism Department headquarters amid heavy security.

"The DNA and polygraph tests of this beast have been matched," Punjab Chief Minister Shahbaz Sharif said yesterday.

Sharif proposed changes in the law so that the suspect could be hanged in public.

The suspect was known to the girl's family and would also frequent her house, police said.

On January 5, the girl had gone missing while going to a religious tuition centre near her house in Kasur city, some 50-km from Lahore. Her parents had been in Saudi Arabia to perform Umrah and she had been living with her maternal aunt.

After her abduction, a CCTV footage showed her walking with a stranger near Peerowala Road.

On January 9, her body was recovered from a heap of trash near the Shahbaz Khan Road. Autopsy report had confirmed rape.

Police have carried out DNA test of more than 1,000 suspects. The Supreme Court on last Sunday gave a 72-hour deadline to Inspector General of Police to arrest the culprit.

The chief minister said the suspect was arrested earlier but was freed when he complained that he had heart problems.

Promoted
Listen to the latest songs, only on JioSaavn.com
Last year, 4,139 incidents of child abuse took place in the province where 43 per cent of them were acquainted with perpetrators.