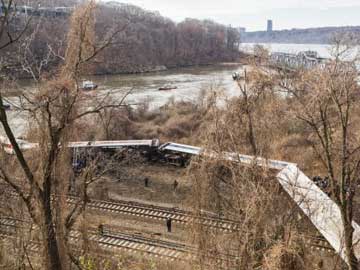 Emergency crews respond after Metro-North train derailed near the Spuyten Duyvil station in the Bronx borough of New York City.

New York: Dull thuds pulsed through the eight cars of the Metro-North Hudson train, jolting passengers from an early morning doze or from the Christmas carols or pop tunes playing on their iPods.

In cars at the back of the train, bones broke, shattering glass sliced through skin, cars fell on their sides and dirt flew in as the windows sheared underbrush beside the track. As the cars toppled, some passengers were wedged into overhead luggage racks; others, knocked unconscious, caromed about until the skidding locomotive came to a grinding halt.

But in the front cars, the chaos was total.

The first car's nose was just feet from Harlem River. The car's metal flanks were covered in blood. That was the first thing Emilie Miyauchi, 28, saw when she climbed through the jaws of the shattered window next to her seat. Beneath the blood was the crumpled body of a woman who had been thrown from that car. "You just see that, you think, 'Nobody survives that,'" Miyauchi said.

The passengers who died in the crash were seated in the front three cars, an official said. Sixty-three other people were reported injured, some of them critically.

The cars thrashed from side to side, and jolted back and forth. Passengers unable to grab hold of a seat back or armrest flew end to end, smashing into one another, the floor, the ceiling, the seats, the metal handrails.

"There was a lot of screaming and a lot of bodies flying around," said Ryan Kelly, 26, a photo retoucher from Yorktown Heights, N.Y., who braced himself in an overhead rack. His left hand was crushed. Sharon Martin, 42, was wrenched from sleep by the crash. When it was finally over, the woman next to her was unconscious.

Residents in buildings overlooking the tracks stared in disbelief at the scene unfolding below. Michael Keaveney, 22, a security worker who lives in an apartment above the tracks, was awakened by the tumult. When he looked out his window, he said, "I thought I was still dreaming."

When the train came to rest, passengers battered windows until they broke. Other riders were trapped inside for long minutes before emergency workers arrived, according to Kevin Farrell, 28, a hospital administrator who watched the drama from his apartment.

Seven minutes and two seconds after the first calls went out, emergency workers arrived, slightly delayed by the train's imprecise location, a marshy area just north of Spuyten Duyvil Creek station, said Jay Jonas, deputy chief of Division 7, which was in command early in the operation. Diesel fuel glugged out into the dirt.

Firefighters quickly stabilized the cars strewed across the marsh grass and sedge. Jacks and air bags were deployed to prevent them from shifting and causing more injuries. Firefighters propped ladders on the carriages and scrambled up to reach windows and doors. Underneath one car was a passenger who had been killed.

More than 150 firefighters and emergency medical technicians swarmed over the scene, cutting some passengers free from the metal and glass, some walking from car to car, performing first aid on the injured.

Stunned passengers who had been extricated stood or sat in grass spangled with broken glass. A woman sat with her leg hanging at an unnatural angle.

As residents of the area watched in disbelief, emergency workers removed part of a chain-link fence running along the tracks and handed passengers to ambulance workers waiting on the other side.

There were concerns that the force of the crash might have flung some passengers into the nearby river. Emergency boats and divers scoured the water and cadaver sniffing dogs searched the shore. No bodies were found.

Martin, 42, of New Windsor, N.Y., who had been sleeping, was bound for her job as a station clerk for the Metropolitan Transportation Authority.

Then suddenly, the noise, the dirt, the glass, the pain.

At Jacobi Medical Center in the Bronx, on Sunday evening, her brother Reginald Ragin said Martin was mostly hale, but her face was covered in bruises.

Some passengers had remained beside the river: forms in black bags.

Promoted
Listen to the latest songs, only on JioSaavn.com
"God spared us that information that someone else is going to have to endure," Ragin said.