Apparently, the use of cannabis as a mind-altering substance dates back at least 2,500 years. 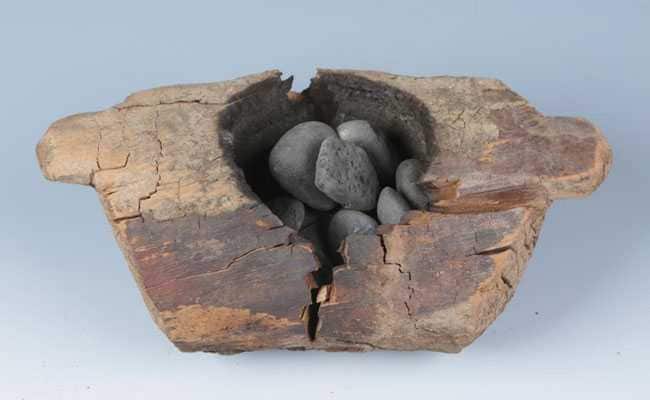 Archaeologists have dug up evidence that people were catching a cannabis buzz way, way before Woodstock, before the Summer of Love and even before there were jazz clubs or alarmist movies warning of "Reefer Madness." Apparently, the use of cannabis as a mind-altering substance dates back at least 2,500 years.

That's the conclusion of a new study, published Wednesday in the journal Science Advances, based on the chemical analysis of cannabis residues found by archaeologists in a Western China burial site.

The report does not change the historical consensus about early cannabis use, but it does add some striking physical evidence for it. That consensus was based on disputed or ambiguous archaeological findings and on the account of the Greek historian Herodotus. Writing in 5th century B.C., Herodotus described people in Central Asia burning the plant and inhaling the smoke in tentlike structures during burial ceremonies. He compared this ritual favorably to what went on in Greek bathhouses.

The residue of the cannabis burned at the western China site was found in wooden containers, or braziers, which held stones that could have been heated to create smoke from plant material. Laboratory tests showed that this cannabis had higher levels of the psychoactive chemical THC than most wild varieties of the plant. Researchers say they don't know whether people had cultivated the plants, breeding them for higher THC, or had merely identified some rare varieties of the plant that had more of the buzz-inducing chemical.

The new research provides "a solid, unequivocal data point for actual use of this plant as a drug," said Robert Spengler, a co-author of the new paper and a scientist at the Max Planck Institute for the Study of Human History in Jena, Germany.

The fact that this was done in conjunction with a burial suggests that the participants in the ceremony were using the cannabis "to communicate with nature, or spirits, or deceased people," said the paper's senior author, Yimin Yang, of the University of Chinese Academy of Sciences.

None of this surprises Mark Merlin, a professor at the University of Hawaii and a recognized expert on the history of cannabis use. Merlin, who was not part of the new study, said this research confirms that people have been using cannabis for religious or spiritual purposes for thousands of years. The new archaeological dig expands the range of sites preserving cannabis use, he said.

At another site, much farther to the north in China, 2 pounds of chopped-up cannabis were found next to the head of a man buried in a cemetery, dated to about the same period, Merlin said. The plant was placed there "to probably allow this man to use this to go into the spirit world," Merlin said.

"There is a very deep history of a relationship between cannabis and humans, for many uses - fiber, seed, oil, food, medicine and psychoactive or spiritual or other uses," Merlin said.

Cannabis had two phases of domestication, Spengler said. It was first cultivated in eastern China at least 3,500 years ago and was prized as a source of fiber, oil and food. The wild plant is naturally very low in THC, and there is no evidence that the earlier domestication was tied to a desire to inhale the smoke.

But the site in Western China indicates that people eventually discovered and cherished another latent feature of cannabis - the presence of tetrahydrocannabinol, or THC. In 2013, archaeologists began an excavation of eight tombs in a burial site, called Jirzankal Cemetery, which is in the Pamir Mountains of Western China and more than 9,000 feet above sea level.

The archaeologists extracted organic material from the broken remains of 10 wooden braziers that showed signs of having held burning material. The researchers also found four stones that had burn markings. The organic material was examined in a laboratory through a chemical analysis known as gas chromatography - mass spectrometry (GC-MS) that revealed the presence of cannabis with relatively high levels of THC.

The region is part of the Silk Road, a trading route that thrived for many centuries, starting late in the first millennium B.C. and continuing into the Middle Ages. Along that route, precious commodities were transported across Eurasia, linking China with Europe. Previous research has shown that some of the people buried at the cemetery were migrants. Among the objects recovered by archaeologists are a harp from Western Asia and silk from eastern China. This suggests that long-distance travel was common even before the Silk Road (a term coined in the 19th century) became a fully active trading route.

"I think it's very important to recognize how deeply intertwined humans are with the entire biotic world around them, especially plants," Spengler said. "People have been cultivating and . . . moving plants for thousands of years. And doing so, they have directly enforced evolutionary pressures on those plants, which have changed the plants and have also changed the trajectories of human history."

Nicole Boivin, director of the Department of Archaeology at the Max Planck Institute in Jena, said the new research is a prime example of how new laboratory techniques are shining a light on the distant past.

"It does completely transform our ability to say things about the deeper past, before we have historical records," she said.