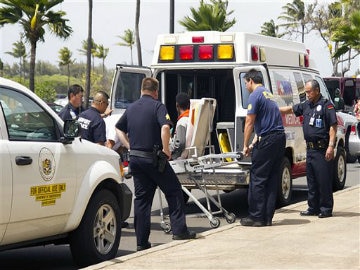 A 16-year-old boy, seen sitting on a stretcher center, who stowed away in the wheel well of a flight from San Jose, California, to Maui is loaded into an ambulance at Kahului Airport in Kahului, Maui, Hawaii on Sunday afternoon, April 20, 2014

San Jose: A 16-year-old boy scrambled over an airport fence, crossed a tarmac and climbed into a jetliner's wheel well, then flew for five freezing hours to Hawaii - a misadventure that stirred concern about possible weak spots in the security system that protects the nation's airline fleet.

The boy, who lives in Santa Clara, California, and attends a local high school, hopped out of the wheel well of a Boeing 767 on the Maui airport tarmac Sunday. Authorities found him wandering around the airport grounds with no identification. He was questioned by the FBI and taken by ambulance to a hospital, where he was found to be unharmed.

FBI spokesman Tom Simon in Honolulu said the teen did not remember the flight from San Jose.

It was not immediately clear how the boy stayed alive in the unpressurized space, where temperatures at cruising altitude can fall well below zero and the air is too thin for humans to stay conscious. An FAA study of stowaways found that some went into a hibernation-like state.

Security footage from the San Jose airport verified that the boy climbed a fence and crossed a runway to get to Hawaiian Airlines Flight 45 on Sunday morning, Simon said.

The airport, in the heart of Silicon Valley, is surrounded by fences, although many sections do not have barbed wire and could easily be scaled.

The boy climbed over during the night, "under the cover of darkness," San Jose airport spokeswoman Rosemary Barnes said Monday.

"Our primary concern now is for the well-being of the boy, who is exceptionally lucky to have survived," Croyle said.

Isaac Yeffet, a former head of security for the Israeli airline El Al who now runs his own firm, Yeffet Security Consultants, said the breech shows that U.S. airport security still has weaknesses, despite billions of dollars invested.

"Shame on us for doing such a terrible job," he said. "Perimeters are not well protected. We see it again and again."

A congressman who serves on the Homeland Security committee wondered how the teen could have sneaked onto the airfield unnoticed.

"I have long been concerned about security at our airport perimeters. #Stowaway teen demonstrates vulnerabilities that need to be addressed," tweeted Rep. Eric Swalwell, a Democrat who represents the San Francisco Bay Area's eastern cities and suburbs.

Unlike checkpoint security inside the airport, which is the responsibility of the Transportation Security Administration, airport perimeters are policed by local authorities as well as federal law enforcement.

Airport police were working with the FBI and the Transportation Security Administration to review security.

The boy was released to child protective services in Hawaii and not charged with a crime, Simon said.

San Jose police say they will forward the findings of their investigation to the district attorney, who can decide whether to file criminal charges in California.

The FAA says 105 stowaways have sneaked aboard 94 flights worldwide since 1947, and about 1 out of 4 survived. But agency studies say the actual numbers are probably higher, as some survivors may have escaped unnoticed, and bodies could fall into the ocean undetected.

In August, a 13- or 14-year-old boy in Nigeria survived a 35-minute trip in the wheel well of a domestic flight after stowing away. Authorities credited the flight's short duration and its altitude of about 25,000 feet. Others who hid in wheel wells have died, including a 16-year-old killed aboard a flight from Charlotte, North Carolina, to Boston in 2010 and a man who fell onto a suburban London street as a flight from Angola began its descent in 2012.

Promoted
Listen to the latest songs, only on JioSaavn.com
An FAA review of high-altitude wheel well survivors said they typically clamber past the main landing gear into a wing recess area next to where the gear retracts. On some aircraft, that space is large enough for two small adults.

The FAA found that all wheel-well stowaways will lose consciousness at high altitude from lack of oxygen, and that their freezing bodies go into a state somewhat similar to hibernation. At 38,000 feet (11,582.4 meters) - the cruising altitude of the Hawaiian Airlines flight - the outside air temperature is about -85 degrees. That would usually be deadly, but some people survive because their breathing, heart rate and brain activity slow down.
Comments
CaliforniaHawaiHawaiian AirlinesTom Simon