Stories Of Loss And Hope In A Damascus Square 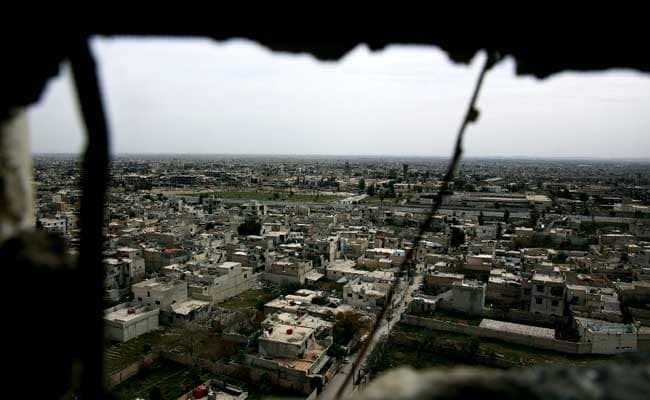 A general view taken from the al-Qaboun rebel held northeastern suburb of the capital Damascus on March 13, 2016 shows damaged buildings in the nearby Jobar neighbourhood. (AFP Photo)

Damascus, Syria: Marjeh Square, at the heart of bustling downtown Damascus, is steeped in the blood of revolt. Its history is intertwined with the hope and tragedy of those who have dared question the authority of Syria's historic overlords.

In 1916, the Ottoman governor Ahmed Djemal Pasha, nicknamed "the Blood Shedder," executed Syrian rebels here, next to the striking bronze and basalt column that still rises above the square today. Later, the French did the same to those who fought against their mandate. Corpses were left hanging in the square as a grim warning to others.

Today, it is filled with the stories of suffering from another revolution, one that has morphed into a war drawing in global powers and stretched for five years. Surrounded by cheap hotels and other lodging, it is a confluence of Syrians from across the broken country.

They come from Raqqa and Deir al-Zour, from different existences where the Islamic State is in power and still strings up dissenters in public squares.

Some are newly displaced with nowhere to go, others are visiting the capital for official paperwork or medical treatment, and plan to go back. They mix with office workers on their lunchtime breaks, with soldiers on patrol and with the children who feed the flocks of pigeons that gather. It's a crisscross of deeply contrasting lives.

A group of women sit in the dirt at the base of one of the square's four towering palm trees, their rural attire sticking out here in central Damascus. Their belongings lie in bundles on the ground.

One 30-year-old woman says she and her five children left their home just outside Islamic State-held Manbij two weeks ago. Her house was now a front line between U.S.-backed rebel forces and the Islamic State. Militants took over and punched holes in the walls to create fighting positions. The family was told to leave.

When they arrived in Damascus, they rented accommodations near the square but were now out of money and had been kicked out that morning. "It seems like we'll sleep here," she says, gesturing at the ground. Like others from Islamic State-held areas, she declines to be named to protect family members who remain there.

A team of two women from Syria's Ministry of Health make their way over, giving polio vaccines to the children. They come every day to find the displaced, in an attempt to stop the spread of the virus, which reemerged as vaccinations were disrupted during the chaos of war.

"We target kids from the hot zones," says Janet Awad, 36, as she gave a young boy a dose. "There are always plenty here."

Two men in traditional red and white headscarves sit on the other side of the square, on a bench in front of the monolith that was erected by the Ottoman Sultan Abdul-Hamid II to commemorate the region's first telegraphic link.

They are visiting from al-Bukamal in Deir al-Zour province, near the border with Iraq, to finish some paperwork. The Islamic State has made it more difficult for civilians to leave their territory but still sometimes grant permission for some to leave for medical treatment or other needs.

A woman, also from Deir al-Zour, is in the capital for medical treatment for heart problems, which she says have been made worse by the lack of food.

"We are starving, it's difficult to work, and they kill our sons," she says. "If someone refuses to join them, maybe your family will be killed."

But now, she's briefly at the center of President Bashar Assad's seat of power. A portrait of him in military uniform hangs nearby, with tanks, missile launchers and jet planes painted around him.

The square is also home to Syria's Interior Ministry building, making
it a gathering point for demonstrations back in 2011, when the uprising first reached Damascus. Later, as the revolution became war, it was the site of car bomb attacks.

On another side it is flanked by the silver-domed Yalbugha mosque, built on the site of an ancient Mamluk one that was ripped down by Bashar's father, Hafez, in the 1970s for redevelopment. The new structure has been officially renamed the "Mosque of the Martyr Basil al-Assad," the president's older brother who died in a car crash. It, and a business center behind it, sat as empty shells for years in what some say was testimony to Syria's graft.

But even here, in the center of Damascus, some travelers do not conceal their lack of opposition to the Islamic State. Two women are passing through from Raqqa to visit their husbands in Lebanon.

They plan to return.

"The situation is very good," says one in a gold trimmed headscarf.

"We don't need any interference from anyone. We just want to live our lives in peace."

As she talks, a parade of Humvees decorated with the faces of Assad and the Lebanese Shiite leader Hassan Nasrallah passes through the square to mark the anniversary of Assad's Baath Party seizing power.

"A tribute to Dr. Bashar Hafez al-Assad, the man of resistance," a female voice rings out over the speaker blasted by the convoy. "A tribute to our heroes in the Syrian Arab Army and the honorable Syrian people. A big tribute and mercy for the souls of the honorable martyrs of Syria."

Residents in the buildings overlooking the square gather in their windows to take photos and film. Young boys jump on the back of the cars, waving to those gathered on the pavements.

The women from Raqqa look up to see the convoy, then turn away.