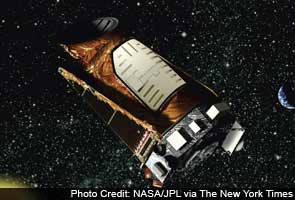 In undated handout photo, an artist's rendition of the Kepler telescope, which broke down in May 2013

NASA said Thursday that its celebrated planet-hunting Kepler spacecraft, which broke down in May when a reaction wheel that controls its pointing failed, could not be fixed and would never again search for planets around other stars.

The disappointing news brings to an end, for now, one phase of the most romantic of space dreams, the search for other Earths among the exoplanets of the Milky Way. NASA has already asked astronomers for ideas on how to use the hobbled spacecraft, whose telescope remains in perfect shape.

Even as they mourned the end of Kepler, astronomers said its legacy would continue as they worked their way through a trove of data the spacecraft has gathered.

At last count, Kepler had discovered 3,548 possible planets, and 135 of them - some smaller than the Earth - have been validated by other observations, including earthbound telescopes. But hundreds or thousands more are in the pipeline, said William Borucki of NASA's Ames Research Laboratory in Mountain View, Calif., Kepler's originator and principal investigator.

Kepler was launched into an orbit around the Sun in March 2009. Its official mission was to determine the fraction of stars in the galaxy that harbor Earthlike planets by carrying out a survey of some 150,000 stars in the constellations of Cygnus and Lyra, looking for the dips in starlight caused by planets passing, or transiting, in front of their suns.

Three dips, or transits, are considered the criteria for a planet candidate, which means the Earth or a planet in a similar orbit that was habitable would take three years to show up. Accordingly, Kepler was designed to operate for four years, but other sunlike stars turned out to be more jittery in their output than expected, making the detection of Earth analogues more difficult. Since astronomers could learn a lot more from Kepler if it went on collecting data, the decision was made last year to extend the spacecraft's mission for three more years, until 2016.

Among its finds were a planet nicknamed Tatooine, after the "Star Wars" planet with two suns, otherwise known as Kepler 16b, the first one found that orbits two stars at once. Another was the so-called Styrofoam planet, which is again half as large as Jupiter but so puffed up by the heat of its star that it is only one-tenth as dense.

The closest Kepler has come to finding another Earth was in April, when the team discovered a pair of planets about half  again as big as the Earth orbiting a yellow star, now known as Kepler 62, that is 1,200 light years away. Both planets reside in the "Goldilocks" zone where temperatures should be lukewarm and suitable for liquid water and thus life as we imagine it.

By then, however, Kepler was already in trouble.

In order to do its job of precisely monitoring starlight, Kepler has to keep pointing accurately enough so that each star in the field of view stays on the same pixel in the detector, equivalent to pinpointing a soccer ball in Central Park as seen from San Francisco.

Kepler was launched with four reaction wheels, essentially gyroscopes, of which three are needed to keep it pointed. Last summer, one wheel showed signs of too much friction and was shut down. A second wheel failed in May, putting the spacecraft into safe mode and jeopardizing the exoplanet search.

Astronomers began to sing dirges. Geoffrey W. Marcy of the University of California, Berkeley, dashed off a poem, which said, in part, "Let jet airplanes circle at night overhead/ Sky-writing over Cygnus: Kepler is dead."

NASA engineers spent several months trying to resurrect Kepler's pointing ability. "We had very little hope it was actually going to be recoverable," said Charles Sobeck, a Kepler deputy project manager, who compared the problem to a stuck wheel on a supermarket shopping cart.

They managed to get both faulty reaction wheels spinning again, but with too much friction. Last week, when they tried to make the spacecraft point, it went into safe mode after a few hours, making it clear that Kepler's planet-hunting days were over.

"I believe they left no stone unturned," said Paul Hertz, NASA's director of astrophysics, in the news conference announcing the end of the rescue effort.

NASA is now pondering ways in which the telescope can be used with two reaction wheels. In one mode, stars would drift across the detector "like a lost nomadic tribe migrating across the Sahara," in the words of Marcy.

Letters looking for ideas have gone out to astronomers, and NASA might eventually convene a review panel to consider future Kepler operations in competition with other science projects, Hertz said.

Meanwhile, astronomers continue to pore over the flood of data that is still in the Kepler pipeline. Borucki - speaking with the relentless optimism of a man who spent 20 years getting Kepler designed, approved and into space - said that Kepler could still perform its prime directive of measuring the frequency of Earthlike planets in the galaxy, albeit with poorer statistical certainty than he would have liked. It would take about three more years of data analysis, he said.

Promoted
Listen to the latest songs, only on JioSaavn.com
"We're going have to dig down hard to find those planets - we know we can do it," he said.

When he conceived the mission 20 years ago, Borucki said, no one knew if there were any planets out there in the galaxy. "Now at the completion," he said, "we know our galaxy is filled to the brim with planets. When you look up at the sky and see it filled with stars, most of those stars have planets."
© 2013, The New York Times News Service