Official results showed the party received 6.8 million of the popular vote at an election twice postponed because of the coronavirus pandemic. 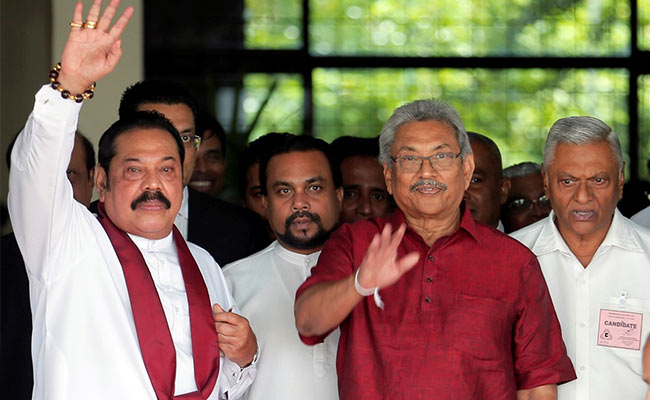 The party of Sri Lanka's ruling Rajapaksa brothers secured a two thirds majority in a parliamentary election that should help strengthen their grip on power.

Prime Minister Mahinda Rajapaksa's Sri Lanka Podujana Party (SLPP) won 146 on its own and could count on the support of at least five allies in the 225-member legislature, according to results released early Friday.

Rajapaksa and his brother Gotabaya, who won a presidential election in November, need a two-thirds 'super majority' to carry out promised constitutional changes.

The brothers want to roll back constitutional changes made by the previous administration that limit the president's powers.

Official results showed the party received 6.8 million of the popular vote at an election twice postponed because of the coronavirus pandemic. Just over 70 percent of the 16.2 million electorate turned out to vote on Wednesday.

Even as results were coming in, Gotabaya Rajapaksa, the prime minister's younger brother, said on Twitter that "results so far indicate an excellent victory for the SLPP."

"We expected a win, a spectacular win, but not this big a victory," Gammanpila told reporters.

Prime Minister Narendra Modi telephoned Mahinda Rajapaksa to congratulate him before the party even had a formal majority.

In a Twitter statement, the prime minister said he looked forward to working "closely" with PM Modi and added that the two countries are "friends and relations".

The Rajapaksa family have dominated Sri Lankan politics for the past two decades. Mahinda was president from 2005 to 2015.

They have ridden a nationalist wave that followed Easter bombings in 2019 by Muslim radicals which killed 279 people.

The brothers are viewed as heroes by the country's Sinhalese majority for orchestrating a ruthless military campaign to end a decades-long Tamil separatist war in 2009 when Mahinda was president and his brother a key figure in the military.

The splintered opposition was decimated. Former prime minister Ranil Wickremesinghe lost his constituency and his party which had 106 seats in the outgoing parliament was reduced to just one seat.

A breakaway party from Wickremesinghe's headed by the son of assassinated president Ranasinghe Premadasa, Sajith, got 20 percent of the vote and was a distant second with 53 seats.

The moderate Tamil National Alliance (TNA) which had 16 seats in the former parliament also suffered badly and was left with just 10 seats in the new assembly, which is due to meet on August 20.

Huge economic challenges await the new parliament. On Wednesday, official figures showed economic growth fell 1.6 percent in the first quarter of this year while the Asian Development Bank forecast a 6.1 percent contraction of the economy this year.