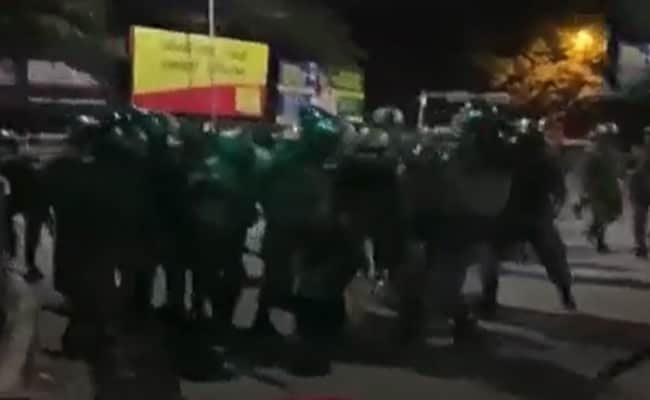 The Newsfirst.lk Sri Lanka journalists can be seen being beaten by the police in videos shared on social media. The organisation is considered Sri Lanka's largest independent news network.

"Freedom of media is paramount to Democracy in Sri Lanka. The Prime Minister requests both the security forces and the protesters to act with restraint to prevent any violence and ensure the safety of the public," the Prime Minister's office said in a statement.

#SriLankaEconomicCrisis | Prime Minister expresses grave regret over the assault on journalists who are covering the ongoing protests, by security personnel. Freedom of media is paramount to Democracy in Sri Lanka: PMO

I wholeheartedly condemn the brutal inhuman attack on @NewsFirstSL journalists by police officers stationed to protect @RW_UNP. SHAME ON YOU, illegitimate Prime Minister.

As Sri Lanka witnessed its biggest protest today since March, thousands of people broke through barricades and entered Sri Lankan President Gotabaya Rajapaksa's residence and his nearby office, venting out anger against the leader. The protesters demanded his resignation as the nation faces its worst economic crisis since independence.

The country's economy is in a state of snowballing collapse as it negotiates a bailout with the International Monetary Fund (IMF). The economic crisis has led to a severe shortage of essential goods like food and fuel which resulted in months of protests against the government.

Amid fury over the crisis, Sri Lankan Prime Minister Ranil Wickremesinghe agreed to resign while the whereabouts of President Gotabaya Rajapaksa, who was evacuated from his house shortly before protesters overran the compound, are still unknown.