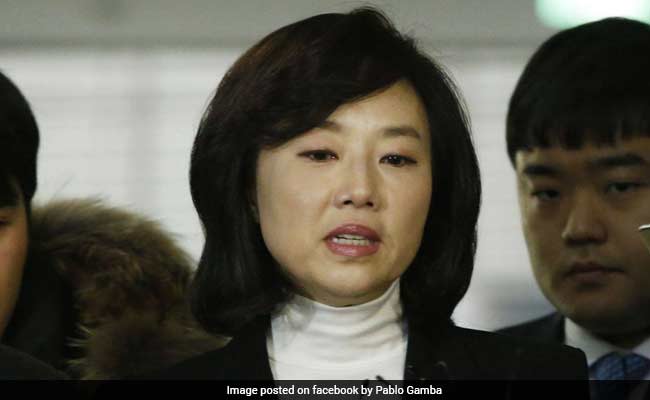 Culture Minister, Cho Yoon-sun resigned hours after she was arrested.

Seoul, South Korea: South Korean prosecutors on Saturday arrested President Park Geun-hye's culture minister and her former top presidential adviser over allegations that they blacklisted artists critical of the government. Culture Minister Cho Yoon-sun and ex-presidential chief of staff Kim Ki-choon allegedly drew up the list of thousands of artists and cultural figures to be excluded from government funding programs. Three other top former officials have already been arrested over the allegation.

The arrests of Cho and Kim came as the Seoul Central District Court approved prosecutors' request to arrest them for alleged abuse of power and other charges.

The blacklist allegation surfaced as authorities widened their investigations into the explosive political scandal that led to Park's impeachment in Parliament last month. The Constitutional Court is holding a trial before ruling on whether to formally end Park's presidency or restore her authority.

Cho resigned hours after she was arrested, and it was accepted by the prime minister, who has had the powers of the president since Park's impeachment.

Park has faced criticism that she tried to curb free speech and labor rights as president. Her government's alleged backlist reportedly included "Oldboy" film director Park Chan-wook and poet Ko Un, who is often considered a contender for the Nobel prize in literature.

Prosecutors accuse Park of colluding with a longtime confidante to extort tens of millions of dollars from businesses and letting her meddle in state affairs. The confidante, Choi Soon-sil, and several of Park's former presidential advisers have been arrested.

Promoted
Listen to the latest songs, only on JioSaavn.com
In a setback to prosecutors' investigation, a Seoul court on Thursday disapproved the arrest of Lee Jae-yong, the de-facto leader of Samsung Group which donated the largest portion of the money to two non-profit foundations controlled by Choi. Prosecutors believed the Samsung money amounted to a bribe, but the court said there was not enough justification to arrest Lee.