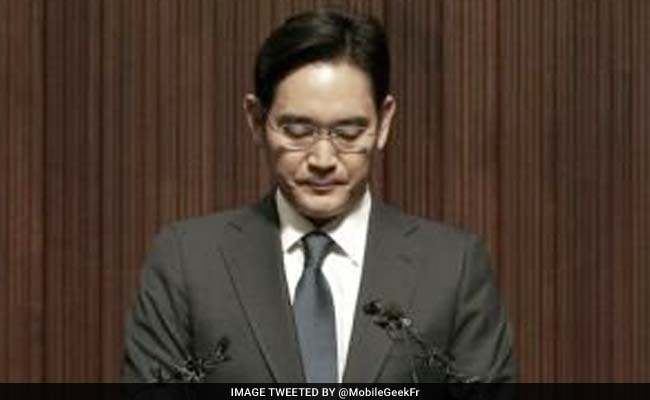 Samsung is already trying to repair an image tarnished by the Note 7 recall crisis. (file image)

Seoul, South Korea: South Korean prosecutors on Monday sought the arrest of the heir to the Samsung empire over a scandal that has seen the country's president impeached, in the latest setback for the giant conglomerate.

Samsung, the world's largest smartphone maker, is already reeling from the international debacle over its Galaxy Note 7, which was recalled after some devices caught fire.

Prosecutors investigating the corruption scandal said they asked a court to issue an arrest warrant for Lee Jae-Yong, the only son of Samsung group chairman Lee Kun-Hee.

The Seoul Central District Court said it would rule on the request on Wednesday.

Samsung's revenue is equivalent to a fifth of South Korea's GDP and Lee's arrest could have an "important" impact on the economy, a spokesman for the prosecutors acknowledged. "But we believe that achieving justice is more important," he said.

The scion is vice chairman of Samsung Electronics, the firm's flagship subsidiary, and the de facto head of the group after his father suffered a heart attack in 2014.

If prosecuted and convicted he could face a maximum five years in prison, but leading South Korean businessmen have previously been given suspended terms for such offences -- including the elder Lee.

Samsung is already trying to repair an image tarnished by the Note 7 recall crisis and faces stiff competition from Apple and smaller Chinese rivals.

"This is a big crisis for us," Yonhap news agency quoted an unnamed senior Samsung executive as saying. "We have to make aggressive investment and merger and acquisition decisions to race ahead of competitors.

"But we are afraid that the latest development would cause great delays in our decision-making process."

But Greg Roh, analyst at Seoul-based HMC Investment & Securities, said the firm had a "very well-organised management system" and was not driven by "a certain personality".

The scandal could even help Samsung in the long term, said Shim Jung-Taik, an author of several books on the firm, if it persuaded the founding Lee clan to improve the group's opaque governance structure and become more transparent.

Choi is accused of using her ties with the president to coerce top local firms into "donating" nearly $70 million to dubious non-profit foundations which Choi then used as her personal ATMs, in exchange for political favours.

Lee, 48, who was questioned in a marathon 22-hour session last week, is accused of bribery and embezzlement for approving decisions to pay Choi 43 billion won ($36.4 million), and of perjury at a parliamentary hearing, the prosecution spokesman said.

In a statement Samsung said the prosecutors' decision was "hard to understand".

"There was no support that sought something in return," it said.

Prosecutors are probing whether Samsung's payments were aimed at securing government approval for a  2015 merger of two of its units.

The merger of Cheil Industries and Samsung C&T was seen as a key step towards ensuring a smooth third-generation power transfer to Lee.

It was opposed by many investors who said it wilfully undervalued Samsung C&T's shares. But it was backed by the National Pension Service, a major Samsung shareholder.

Former welfare minister Moon Hyung-Pyo was formally charged Monday with abuse of power for allegedly pressuring the fund's managers to approve the deal.

Park was impeached by parliament last month, and the constitutional court is deciding whether to uphold the decision.

Choi, who is currently on trial for coercion and abuse of power, appeared at its proceedings for the first time on Monday.

She choked with emotion at one point and denied seeking any financial favours using her presidential connections.

Choi admitted visiting the presidential Blue House several times to help Park handle "personal matters" and had shared an e-mail account with a senior presidential aide to edit some of Park's speeches.

Promoted
Listen to the latest songs, only on JioSaavn.com
But she insisted she had no role over the Samsung merger: "It's way too complicated for me."