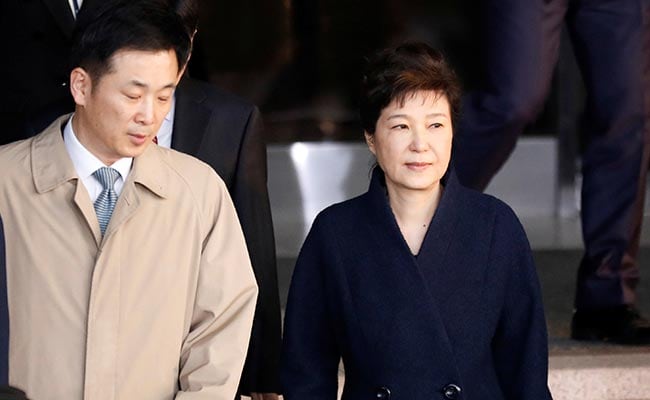 Ms Park did not respond to reporters' questions as she emerged after interrogation of 22 hours. (Reuters)

SEOUL: Former South Korean President Park Geun-hye left prosecutors' offices early on Wednesday after being questioned in an investigation into a corruption scandal that brought an early end to her political career.

Ms Park did not respond to reporters' questions as she emerged from the building after nearly 22 hours and got into a waiting car to be driven to her private home in the capital, Seoul.

Prosecutors questioned Ms Park as a criminal suspect for the first time since the Constitutional Court on March 10 upheld her December impeachment by parliament.

Ms Park is accused of colluding with a friend, Choi Soon-sil, to pressure big businesses to donate to two foundations set up to back the former president's policy initiatives.

She and Ms Choi have denied wrongdoing.

Prosecutors have declined to comment on whether Park will be called back for more questioning or whether they would seek an arrest warrant from a court to detain her.

They did not discuss the details of the questions but said Ms Park was responding well to the investigation.

Ms Park, 65, who became South Korea's first democratically elected president to be removed from office, issued a brief statement on arrival at the prosecutors' offices on Tuesday, her first public remarks since her downfall.

"I am sorry to the people. I will faithfully cooperate with questioning," Park said in front of media.

The questioning lasted 14 hours until just before midnight, one of her lawyers, Sohn Bum-gyu, told reporters.

She and her lawyers reviewed her statements made to the investigators, before leaving at 6:55 a.m. (2155 GMT on Tuesday).

Ms Park has not been charged but could face more than 10 years in jail if convicted of receiving bribes from bosses of big conglomerates, including Samsung Group chief Jay Y. Lee, in return for favours.

Sohn later told Reuters Park wanted to express her gratitude to the prosecutors.

"We appreciate the prosecutors and the people there who have tried to find the truth," Sohn said. "We've seen truth starting to appear."

Park waved to supporters as she was driven back home and smiled and spoke briefly to some outside her home as she got out of the car.

Park's fate and the widening corruption investigation have gripped the country at a time of rising tension with North Korea and China.

The scandal has undermined support for Park's conservative ruling party. A liberal opposition politician, Moon Jae-in, is leading in opinion polls and is expected to win a snap presidential election on May 9.

Park's supporters and opponents have held protests in Seoul for months but police have managed to keep them apart and no serious violence has broken out between them.

Park's arrival home came as salvage experts began trying to raise a ferry, the Sewol, that sank nearly three years ago, killing more than 300 people, most of them children on a school trip.

The disaster was an early blot on Park's record in office that she was never able to clear. Park was accused of failing to take decisive action after news broke that the ferry was in trouble.