'Something Serious Has To Happen': Nikki Haley On North Korea Missile

US President Donald Trump earlier warned that "all options" remain on the table to handle the crisis. 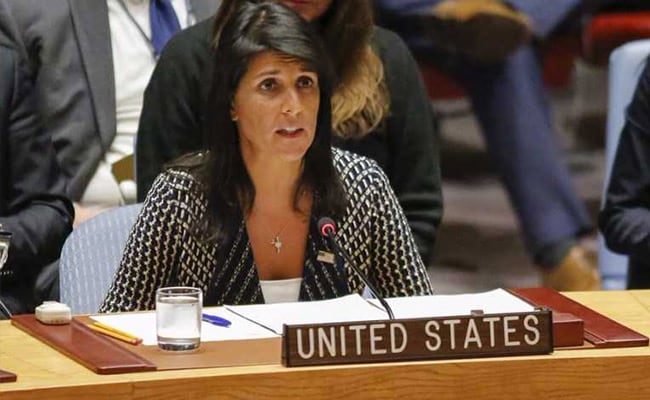 "It's unacceptable," Haley said. "They have violated every single UN Security Council resolution that we've had, and so I think something serious has to happen," she added, giving no specifics. Washington and Tokyo called for an emergency UN Security Council meeting.

"We are going to talk about what else is left to do," Haley continued, saying that "no country" should have missiles flying over a nation of 130 million people like Japan.

New sanctions on North Korea could be discussed, the US envoy said. "I think we have a lot to talk about today. So with all of our partners, what we hope is that China and Russia continues to work with us, like they have in the past on North Korea -- but I think enough is enough," Haley declared.

US President Donald Trump earlier warned that "all options" remain on the table to handle the crisis -- implying Washington has not ruled out a military strike.

The test launch by the isolated but defiant nuclear-armed nation was seen as a major escalation and triggered an angry response from Tokyo.

North Korea defended its right to take "tough counter-measures" in response to what it calls US aggression -- despite repeated calls from Washington for it to come to the negotiating table.

"Threatening and destabilizing actions only increase the North Korean regime's isolation in the region and among all nations of the world," Trump said, in a statement released by the White House.
Comments
North KoreaNiki Haley