Solar Impulse Could be Stuck in Japan for a Year, Says Pilot 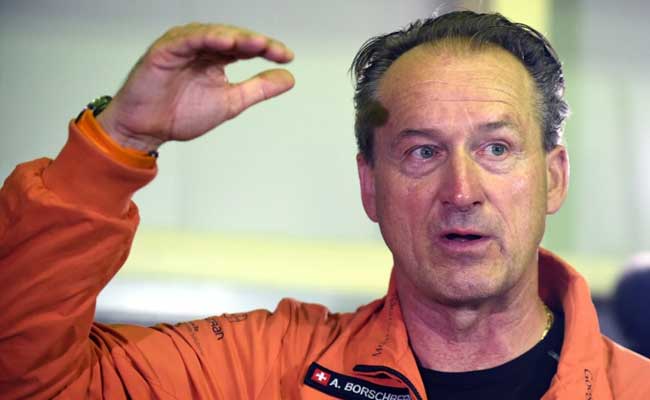 Andre Borschberg of Switzerland, a pilot of the Solar Impulse 2 speaks to journalists prior to board his plane at the Nagoya airport in Nagoya on June 24, 2015. (Agence France-Presse)

Geneva: A solar-powered plane attempting to fly around the world must cross the Pacific within a few weeks or it could remain stuck in Japan for a year, its pilot said in an interview published today.

Solar Impulse 2, which has been stranded in Japan for three weeks and had to postpone a planned take off this week due to bad weather over the Pacific, only has a short window for making the next leg of its journey, one of its two pilots, Bertrand Piccard, told the Tribune de Geneve daily.

By early August, the days will become too short for the solar-driven plane to cross the Pacific, and subsequently the Atlantic Ocean safely, he said.

"Before August 5, we must have crossed the Pacific or the Atlantic," Piccard said, adding that if the team is unable to do so they will have to find a permanent hangar where the fragile aircraft can pass the winter.

If the plane makes it to the United States, it can easily pass the winter there before crossing the Atlantic to complete its around-the-world trip, since the team has a permanent hanger in New York, Piccard said.

His partner, Andre Borschberg, had been scheduled to take off with the plane from the central Japanese city of Nagoya early Wednesday bound for Hawaii, on the latest and most ambitious leg of a bid to circumnavigate the globe using only power from the sun.

But after a few agonising hours poring over meteorological forecasts covering the five days and five nights the flight was expected to take, mission chiefs pulled the plug.

"There is still a cold front that is blocking our route. Our meteorologists are constantly evaluating alternative routes," Piccard said.

He pointed out that Solar Impulse 2 can "fly through clouds for 10 hours, but after that it needs blue skies to recharge its batteries. Otherwise, Andre will have to jump out in a parachute."