How German Journalists Are Using Snapchat To Teach Teens About Holocaust

Thousands of Holocaust survivors have had their stories documented for posterity over the years, as individuals and institutions race against time to make sure nobody forgets what happened to them, even after they're gone. 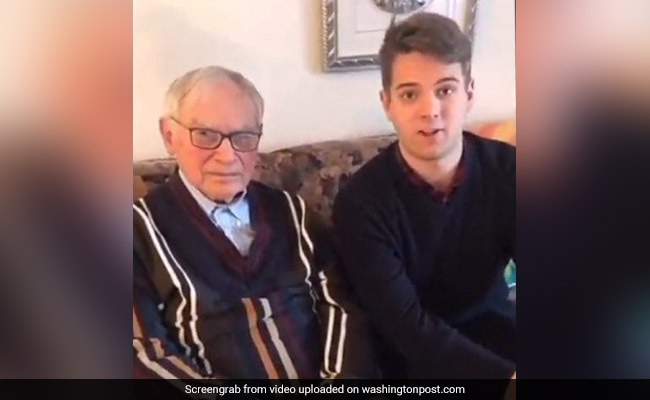 Decades later, Maja Krapina is still haunted by the death of her 9-month-old sister.

"We hid from the Nazis, but my sister was crying extremely loud," she recalled in Russian. "So my mother was holding her very closely."

Her sister suffocated in her mother's arms.

Death would come for her mother later; Krapina and her brother discovered her hanging at a gallows in the Jewish ghetto in Minsk, Belarus, where the family lived during World War II. Krapina eventually lost her father, grandparents and a second sister during the Holocaust.

Thousands of Holocaust survivors have had their stories documented for posterity over the years, as individuals and institutions race against time to make sure nobody forgets what happened to them, even after they're gone. But what is different about Krapina, who still lives in Minsk, is that she told this story on Snapchat.

She was interviewed as part of the Sachor Jetzt project, a collaboration between several young German journalists who are seeking to teach the next generations about what happened during the Holocaust by bringing survivors' stories to a platform native to young Germans. To reach broader audiences, they also republish some Snapchat stories on YouTube and promote the project on Facebook, Instagram and Twitter.

Sachor Jetzt has interviewed about 50 people and has recently begun filming videos in English with subjects from the United States. They most recently spoke to Ernie Gross, a survivor, and Don Greenbaum, the American soldier who liberated him, and hope to do more interviews in the United States and Europe throughout the year.

As a new threat emerges from online communities of white nationalists and anti-Semites, which connect like-minded individuals through the internet and social media, Sachor Jetzt's journalists are hoping to warn a new generation about the dangers of the present by educating them about the horrors of the past.

"The big problem we see is the Holocaust is not being seen as close in history as it was a few years ago," said Henry Donovan, 29, a journalist at the Bild newspaper in Germany and a member of the Sachor Jetzt project. "We want to be a part of this process of preventing the up-and-coming youth of forgetting what happened."

"The world that they are going into is becoming more and more unsettled in terms of anti-Semitism once again," he said.

Yom Hashoah, the holiday of Holocaust remembrance, begins Wednesday evening, just days after one person was killed and three others injured when a gunman opened fire at a synagogue in Poway, California. Just six months before, 11 worshipers were killed at a synagogue in Pittsburgh; the alleged killer had professed anti-Semitic views online before attacking Tree of Life during the Sabbath.

Sachor Jetzt - a combination of the Hebrew word "sachor," meaning remember, and "jetzt," a German word meaning "now" - began as a project for journalism students in 2016 at the Axel Springer Akademie in Berlin. Sebastian Gubernator, 26, a founding member of the team who now works at Die Welt, recalled that "our basic idea was to use Snapchat more or less the way teenagers use it."

The playful smartphone app, known for disappearing videos, photos known as "snaps," and an array of silly filters users could graft on to their faces, doesn't initially seem like the kind of place for Holocaust survivors to give testimony to one of history's darkest chapters. But employed carefully, it can establish an astonishing intimacy between viewer and subject.

Most of the interviews begin with a Sachor Jetzt journalist introducing themselves in selfie mode or with a colleague filming them. They speak directly to the audience, introducing the survivor they are about to meet and what to expect from their story. The tone of the videos is respectful, but casual - this is not a History Channel documentary.

A few snaps later, viewers get to sit down with a survivor, who explains what happened in 10-second videos. The truncated format, far from limiting for the survivor, makes each detail land like a punch to the gut.

Donovan and Gubernator said that some of the interviews are preserved on the project's website. They say they have approximately 5,000 followers, a total gleaned from the number of people who started watching the first snap in the interview.

The journalists find survivors to interview by working with organizations such as the Museum of Tolerance in Los Angeles and the World Jewish Congress or finding existing interviews in the news media. While some of Sachor Jetzt's subjects have been interviewed before, speaking to Snapchat is a new experience for many.

"Some of them actually have heard of Snapchat, they have a basic idea of what Snapchat is," Gubernator said. "Most of them haven't. We explain that they are going to videotape them on the iPhone within a very short time. We will videotape a lot of small clips that will be played in a row and become a story."

But when they see the finished video, they understand what the journalists are trying to accomplish.

"These projects are important because they humanize the history of the Shoah," the Hebrew term for the Holocaust, said Rabbi Abraham Cooper of the Simon Wiesenthal Center, which is affiliated with the Museum of Tolerance. "It's important to see the face of victims and hear their authentic voice."

While Cooper said that the true lessons of the Holocaust could not fully be captured with the brevity of social media, it could at least introduce a new generation to what happened and encourage more awareness among young people.

"This generation is rapidly leaving that stage of history," Cooper said. "However we can use social media or other internet technologies to maintain and present the legitimate voices of the victims, that's a good thing."

(Except for the headline, this story has not been edited by NDTV staff and is published from a syndicated feed.)
Comments
HolocaustHolocaust survivorsSnapchat stories