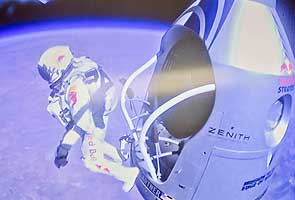 Cape Canaveral (Florida):  Austrian daredevil Felix Baumgartner's supersonic plunge to Earth from the stratosphere could help determine whether space tourists should wear spacesuits similar to the one that protected him as he shattered the sound barrier.

"This wasn't just a mild penetration of the sound barrier," Mr Baumgartner's doctor, Jonathan Clark, said on Monday as the skydiver and his crew celebrated Sunday's record-breaking dive from about 24 miles (39 kilometers) up.

His goal was to break records - highest sky dive, fastest free fall, biggest balloon to carry a person into the sky - but the feat was closely followed by doctors, engineers and scientists working to make spaceflight and high-altitude aircraft more survivable in accidents.

Before that, Mr Clark served on a team that investigated the 1986 shuttle Challenger accident, another space disaster that claimed the lives of seven crew members.

Among those interested in data collected during Mr Baumgartner's free fall are NASA doctors and engineers, companies developing space taxis and the Federal Aviation Administration, which oversees the fledgling commercial spaceflight industry and is deciding if spacesuits should be mandatory for space tourists.

During his sky dive, Mr Baumgartner wore a specially made suit similar to the orange pressurised flight suits that space shuttle astronauts began using after the Challenger disaster.

Until Mr Baumgartner's jump on Sunday, the suits had never been tested in supersonic flight or certified beyond 100,000 feet (30,480 meters), the altitude that previous free-fall record holder Joe Kittinger reached in 1960.

"Felix demonstrated that you can penetrate the sound barrier," Mr Clark said. "He didn't just go transonic, he went supersonic. Going Mach 1.24 is incredible. That is so much further beyond any limit of human endurance. It's just amazing."

"If you had a breakup of a spacecraft during launch and got lofted to 130,000 feet (39,624 meters) and got out, you could survive and go through the sound barrier. Maybe it wouldn't be pretty. You might be unstable, but eventually when you got lower you would have more control," Mr Clark said.

Future space travellers also could have an emergency drogue chute packed on their suits that would automatically deploy.

"In our case, we wanted to go fast, so to break the sound barrier we didn't want to use a drogue chute. But if you had a drogue chute, you would go slower, and you would be much more stable and less likely to go into a flat spin," Mr Clark said.

Sealed inside his pressurized suit, Baumgartner did not feel himself going through the sound barrier, the skydiver told reporters after landing on Sunday.

"It was like swimming without touching the water. I was fighting all the way down to regain control," he said.

"I had a lot of pressure in my head, but I didn't feel like I was passing out. I felt like I could handle it."

Doctors were not sure what blasting through the sound barrier would do to the human body. In addition to going into an uncontrollable spin and possibly losing consciousness or worse, Baumgartner's supersonic body could have triggered dangerous shock waves that may have collided with the force of an explosion.

"I'd love to give a special one-finger salute to all those who said he was going to come apart when he went supersonic," quipped Kittinger, who served as an adviser on the project.

Promoted
Listen to the latest songs, only on JioSaavn.com
For the next six months or so, Mr Clark and his colleagues will be analysing data from the dive.