Children in school uniform marched alongside teens with skateboards tucked under their arms and grey-haired protest veterans supporting the younger generation. 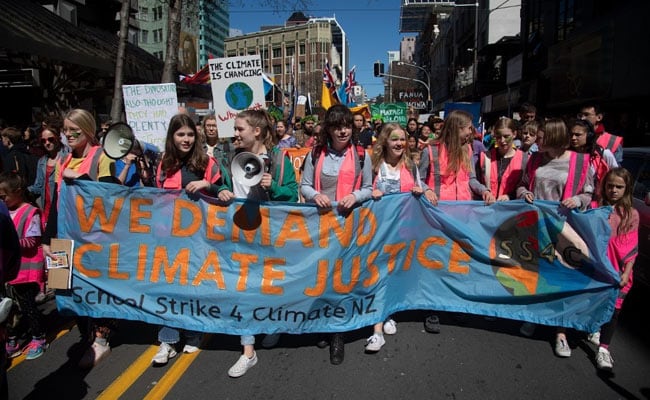 Protesters march to Parliament down Lampton Quay during a climate strike march. (AFP)

More than 40,000 people packed into the grounds of Wellington's parliament buildings Friday, giving the latest global climate strike a flying start with the largest turnout yet seen in New Zealand.

Children in school uniform marched alongside teens with skateboards tucked under their arms and grey-haired protest veterans supporting the younger generation.

The latter referenced Swedish teen activist Greta Thunberg's powerful address to the Climate Action Summon in New York on Monday, when she thundered "how dare you" at world leaders over inaction on climate change.

New Zealander James Capie shared a similar sense of outrage and the 13-year-old said his generation would continue to protest until their demands were acted upon.

"People do have every right to be angry. My generation shouldn't be out here missing school," he said at the Wellington strike.

"But it's really important to me that we're out here making a stand against other generations that have really screwed over our planet.

"If enough of us come out here and show enough mana (honour) and support for each other the message will get through." 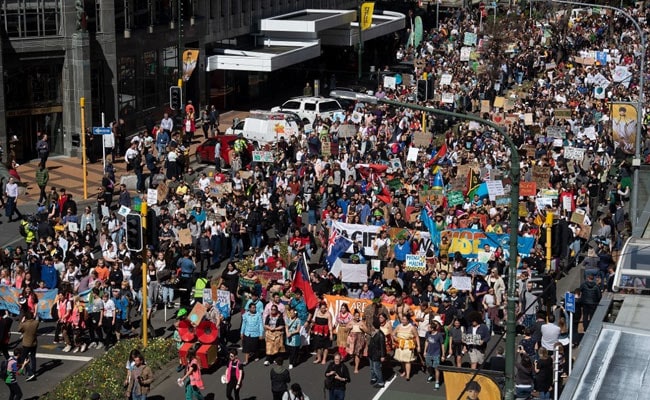 Protesters march to Parliament down Lampton Quay during a climate strike protest march in Wellington. (AFP)

Young people had to act, 14-year-old Armand Headland said, arguing that inaction would see the planet transformed into an uninhabitable wasteland.

"It'll be just like Venus because it's so hot... there's not going to be any humans left because of our activity if we keep burning stuff," he said.

Michael Alspach, 37, braved the crowds with 17-month-old toddler Ella, saying he would not be able to look his daughter in the eye unless he did everything in his power to secure her future.

"It's probably not going to be too bad for me, to be honest, but she's going to be 80 in 2100 and that's when the projections are looking quite bad, so I'm doing it for her," he said.

While dissatisfied at the climate commitments made in New York, Alspach was confident the push for meaningful action was gaining momentum.

"It's great to see so many people out here. Changing perspectives is the first step, actions come after ideas -- I'm hopeful," he said.

(Except for the headline, this story has not been edited by NDTV staff and is published from a syndicated feed.)
Comments
Climate strikeSchool climate protestsNew Zealand protests