One man died of a gun shot to the head and a second of a shot to the chest, said Mariam Hassan of the Sahel Hospital in Beirut's mainly Shiite southern suburbs. 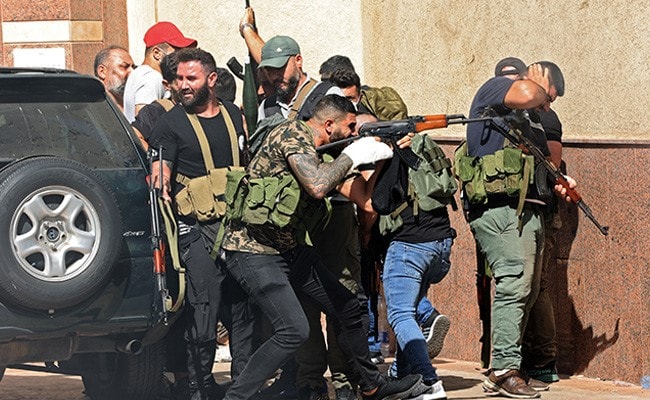 Heavy fighting claimed at least six lives and left dozens wounded in Lebanon's capital Thursday as an escalation of tensions around last year's massive portside explosion turned parts of Beirut into a warzone.

The military deployed tanks and troops to quell the street battles that sparked memories of the 1975-1990 civil war for a city already traumatised by last year's blast disaster and Lebanon's worst-ever economic crisis.

The bloody unrest, in which the sound of automatic gunfire and grenade explosions mixed with the wail of ambulance sirens, broke out after shots were fired at a demonstration by the Muslim Shiite movement Hezbollah and its Amal party allies.

The protesters were rallying against judge Tarek Bitar, tasked with investigating the massive explosion at Beirut port which killed more than 200 people and destroyed swathes of the capital on August 4 last year.

The judge had in recent days been in the sights of Hezbollah and Amal in particular for insisting on subpoenaing top officials in his probe into the accident.

"I can't handle these loud sounds, especially the RPGs," said one resident trapped in the combat zone in the city's southern Tayouneh area, who gave his name only as Samer.

"It's the trauma of the Beirut blast coming back all over again."

Interior Minister Bassam Mawlawi said the "exchange started with sniper fire, with the first casualty shot in the head".

He said at least six people were killed, all by gunfire, without specifying who fired the shots.

The Lebanese Red Cross put the number of wounded at 30.

In the chaos, bullets smashed into houses and left craters in the walls of buildings, while many panicked civilians were trapped in their homes.

Among those killed was a 24-year-old who was hit in the head by a stray bullet while inside her home, a doctor at the Sahel hospital in Beirut's southern suburbs told AFP.

Heavy fire rang out as ambulances rushed the wounded through the deserted streets, a few blocks from the Palace of Justice, where the protesters had rallied to demand Bitar's removal.

The army made some arrests as they raided residential buildings looking for those behind the sniper fire, AFP correspondents said.

Hezbollah and Amal blamed the clashes on the Lebanese Forces, a Christian party that is staunchly opposed to the Iran-backed group.

"Lebanese Forces fighters spread out on rooftops fired sniper shots with the aim to kill," they said in a joint statement.

AFP could not independently verify the claims.

Lebanese Forces chief Samir Geagea hit back, saying the real reason for the violence was the "widespread proliferation of arms," in reference to Hezbollah's arsenal.

Geagea condemned the clashes and called on authorities to launch an investigation.

In the chaos, residents cowered in corridors away from windows, as some were shattered by the gunfire.

A limp body lying on a main street was carried away by rescuers as gunfire rained around them.

Pictures circulating on social media showed children in a school ducking under desks and gathering on the floor outside classrooms.

"I'm with my cousin and my aunt, and we're hiding in a two-square-metre space between rooms because we are afraid of stray bullets," said Bissan al-Fakih, who lives in the area.

"We're wondering if we could leave, but we're not sure if there is a way out".

Maha Yahya, director of the Carnegie Middle East Center, called the violence "a horrific reminder of unhealed wounds" from the civil war.

One social media user wrote that "Beirut now is similar to the Beirut of my childhood".

The man at the centre of the tensions, judge Bitar, is seen as a last hope for justice by many Lebanese but has been condemned as biased and corrupt by political leaders.

Bitar has sparked deep divisions within the government between those who want to keep him in his place and those who are pushing for him to go.

The Court of Cassation on Thursday turned down a lawsuit filed by two ex-ministers demanding his replacement, a court official told AFP on condition of anonymity.

It is the second time this month that the judiciary has ruled in favour of the judge. But the investigator's fate is all but clear as Hezbollah and Amal press ahead with a campaign aimed at removing him.

Political analyst Karim Bitar meanwhile voiced concern about more trouble ahead, saying that "Hezbollah taking to the streets and throwing all its weight in this battle ...could lead to big clashes and to the destabilisation of the entire country".