Singapore is home to almost 250,000 maids, mostly from poor parts of Indonesia or the Philippines, who head to the tiny but wealthy city-state to earn higher salaries 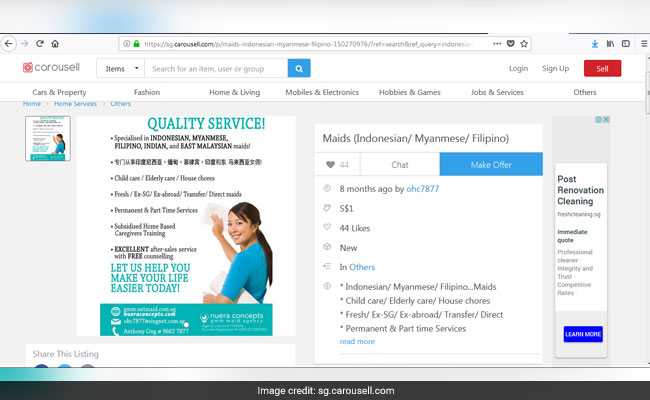 The postings triggered an outcry in Indonesia, with NGO Migrant slamming them as "unjust and demeaning"

Singapore has suspended a maid employment agency's licence and threatened to prosecute the company over "undignified" online ads offering Indonesian helpers for sale, after the postings sparked fury.

Singapore is home to almost 250,000 maids, mostly from poor parts of Indonesia or the Philippines, who head to the tiny but wealthy city-state to earn higher salaries than they can back home.

Conditions for Indonesian maids in tightly-regulated Singapore are generally regarded as better than in other places, such as Malaysia or parts of the Middle East, but the ads on online marketplace Carousell sparked a rare flare-up of tensions over the issue.

The adverts under the user name "maid.recruitment" reportedly offered the services of several helpers from Indonesia, while some ads indicated maids had been "sold".

The postings triggered an outcry in Indonesia, with NGO Migrant Care slamming them as "unjust and demeaning", and they were later removed from the site.

Singapore's labour ministry said in a statement late Wednesday the employment agency SRC Recruitment LLP's licence had been suspended, meaning it can no longer place maids with employers, and authorities were investigating them with a view to filing charges.

Advertising foreign maids on an internet platform meant for trading goods "is completely inappropriate and unacceptable", he said, adding that this is an offence.

The ministry said it told Carousell, which operates in several Asian countries, to take down the offending posts immediately after it was informed about them on September 14.

In a separate Facebook post, Minister for Manpower Josephine Teo said she was "deeply disturbed" by the adverts.

"To many of us, our foreign domestic workers are a part of the family... It is a given that we should treat them with respect," she said.