Singapore has been piloting the trips, which are open only to residents, make no stops and sail in waters just off the city-state. 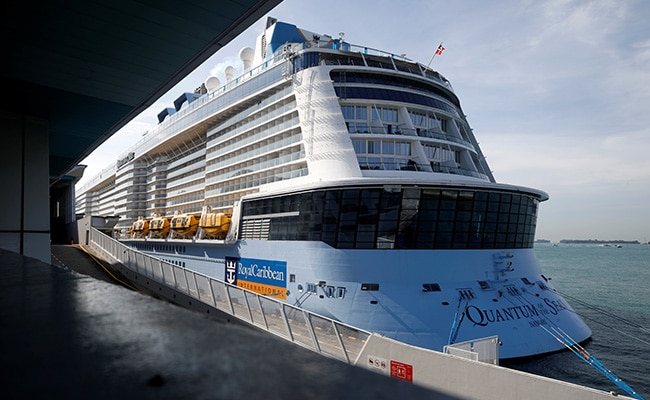 A passenger aboard a Royal Caribbean 'cruise-to-nowhere' from Singapore has tested positive for COVID-19, forcing around 2,000 guests to be quarantined in their cabins and the Quantum of the Seas ship to return to dock on Wednesday.

Singapore has been piloting the trips, which are open only to residents, make no stops and sail in waters just off the city-state.

The global cruise industry has taken a major hit from the coronavirus pandemic, with some of the earliest big outbreaks found on cruise ships. In one case in February off the coast of Japan, passengers were stuck for weeks aboard the Diamond Princess with over 700 guests and crew infected.

"A guest was feeling unwell and tested positive for COVID-19...We are asking all guests to remain in their state rooms to prevent the spread of illness," the captain of the Quantum of the Seas told passengers over the tannoy in a video shared on social media.

"We kindly ask all guests with urgent medical or health situations like diabetes, heart disease etc to contact guest services," he said, adding that the ship had returned to Singapore a day before the end of its planned four-day sailing.

Confirming the positive test, Royal Caribbean said in a statement that all guests and crew who had close contact with the infected guest have subsequently tested negative for the virus.

"Emergency response plans have been activated according to guidelines including immediate isolation of close contacts, contact tracing and deep-cleaning of the ship," Annie Chang, director of the cruise segment at Singapore Tourism Board said.

Passengers will be able to disembark and medical support will be provided if necessary, she added.

Royal Caribbean's 'cruises-to-nowhere' from Singapore began last week, marking the firm's first sailing since it halted its global operations in March due to the pandemic.

The cruises are a part of Singapore's plans to revive its tourism industry that has been battered due to the novel coronavirus, which has infected more than 67.72 million people globally and killed 1,548,575​.

Singapore, which has had just over 58,000 cases and 29 deaths, has been reporting less than a handful of local infections in recent weeks.

The case on board is another setback for Singapore after a plan to open a quarantine-free air travel bubble with Hong Kong last month was postponed at the eleventh hour.

Part of the precautions for the resumption of cruises in Singapore involves pre-departure testing and for guests to carry an electronic contact tracing device and to social distance at all times.

The infected case's close contacts will be placed in quarantine or health surveillance, the Straits Times newspaper reported citing an advisory from the health ministry.

Others will need to monitor their health, while continuing regular activities including going to school or work, and undergo a swab test at the end of a 14-day monitoring period.